This morning, the Two Nerdy History Girls shared the news that a very special little piece of literary history is coming up for auction on 10 July, and it's such a unique treasure that I couldn't help but pass the word along.

This subdued yet stunning blue odontalite (a popular early-19th-century turquoise substitute) ring with its gold setting (and original box) was once treasured and worn by Jane Austen and bequeathed to her sister Cassandra at her death.  It is tiny - only a size 5 1/2 - and its simplicity, as the auction catalogue observes, is consistent with what we know about Austen's subtle taste in jewelry and fashion.  The ring has been passed down through generations of women in the Austen family for almost two hundred years, kept so close and guarded a secret that its very existence was unknown outside the family until now.  One can't help but feel a bit sad to see it depart from that venerable genealogy after so long, but we can only hope it will continue to be lovingly cared for wherever it travels next. 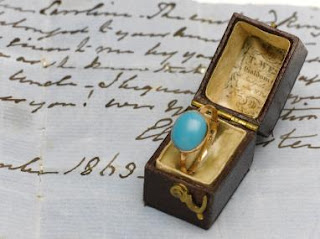 Also up for auction that same day (in case you just happen to have some extra funds lying around, of course!) are four additional lots (55, 56, 57, and 58) of first editions of all but one of Austen's novels.  With initial print runs that numbered from only about 1,000 (Sense and Sensibility) to 2,000 (Emma) copies, these are rare, highly-sought after collector's finds, as the $31,000-$47,000 auction estimate for Pride and Prejudice alone attests.  The early publishing history of Austen's works is fascinating; check out this excellent post from The Cataloguer's Desk if you'd like to learn more.

And as if that wasn't enough of an embarrassment of English literary riches, the same catalogue also includes two pencil drawings by Charlotte Bronte.  The first (lot 60), "Derwent Water," is titled, autographed, and dated in the author's own hand.  The other (lot 61) is a portrait of a young lady, inscribed beneath by Patrick Bronte, stating it to be "By my daughter Charlotte."  A 1907 collected edition of the works of the Bronte sisters used this sketch as the frontispiece for The Tenant of Wildfell Hall, suggesting it was an image of Anne Bronte, but as the auction catalogue indicates, that attribution is questionable.  What is perhaps most fascinating about this particular piece, though, is the fact that it was drawn on the reverse of another pencil sketch, a corner of which remains to tantalize the imagination. 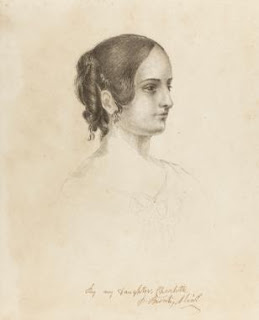