The weekend of August 6 & 7, I attended the ninth annual Redcoats & Rebels at Old Sturbridge Village.  I was present for last year's events as a spectator and experienced a very different perspective this year as distaff with the 5th CT.  It was reported that this year provided record numbers for both participating reenactors and for visitors, and I can easily believe it! British tents on the Old Sturbridge Village Common for Redcoats & Rebels, 2011.
Saturday morning I arrived and upon registration was directed to the area where our regiment was supposedly encamped.  Since I've been to OSV before and knew the layout pretty well, I didn't think finding our group would be a difficult task.  Unfortunately, I was directed to the complete opposite side of town from where our camp actually was.  After a great deal of wandering and several inquiries, I made my way to the lower fields and luckily ran into our Commander as he was leaving the morning meeting.  We then walked over to our camp, which was hidden in a back field covered with furrows and where the grass was quite overgrown (oh the grasshoppers!), which made spotting the furrows difficult as you walked.  Despite our unlucky camp ground, it was wonderful to see everyone and to have the opportunity to bond with some more members of the group. Girls dipping candles in camp at Redcoats & Rebels, OSV 2011
After lunch, the ladies followed the men to the field for the battle reenactment.  We staked a position near the fence in order to capture some action shots.  Unfortunately, as they started retreating, we ended up in the line of the redcoats' fire and we had to retreat as well! Saturday's Redcoats & Rebels battle reenactment at Old Sturbridge Village.
Since our camp was rather distant from the other sites, we unfortunately did not have many visitors to interact with on Saturday.  Some of the children in the camp next to us dipped candles and I managed to get a few stitches done on a new jacket.  In the afternoon a few of us took a stroll through town to enjoy the fife and drum music and to visit some of the other camps and open exhibits.  We ran into a few acquaintances (although I am sorry to have missed Mary from An Historical Lady!) and stopped for some photo ops along the way.  After dinner, some of our members presented an evening of music in the tavern and we all gathered to attend.  Our Commander debuted his gorgeous new gold silk banyan (lined with sea green silk) and cap, both his own creations! Our Commander prepared for a fun evening in his new gold silk banyan and cap
(this photo, unfortunately, does not do his work or the stunning color justice!),
with his new friend Franken-Stein in hand.
I did not stay for the Jolly and as I drove out of the parking lot to head home for the night, the rain began to fall.  That was an interesting drive home.  It poured all night and was still coming down in the morning.  Even with the inevitable mud and the probability of canceled events, I drove back to OSV on Sunday morning.  On my way to our camp, I stopped at some shops to catch brief reprieves from the rain (and to make some purchases as well!).  We remained gathered under our fly until the rain ceased just after noon and the humidity and sun came rushing back.  With the battle called off, we began packing up and bid farewell to each other until our next event together.  Most of the other groups had gone or were packing up early as well, so I took some time to visit some more exhibits before leaving town. The main staircase at the Salem Towne House, Old Sturbridge Village
As always, I've included a few photos from the weekend in a flickr set for your enjoyment.
Posted by Ashley at 12:22 PM 3 comments:

I’m sure by now most of you have seen Nicole’s exquisite pair of hand-made silk shoes on her blog, Diary of a Mantua Maker.  I am also confident that many of you have heard that her most competent instructor, Mr. Walker, will be hosting a week-long ladies shoemaking workshop in New York in just a few weeks!  It will be held at the idyllic Eastfield Village near Nassau, NY, August 20-27.  We are both already registered to attend what promises to be an enlightening and fun week.  Believe it or not, there is still time for you to register, too!  Nicole posted a nice overview of what the workshop entails.  If you have any inquiries or curiosities concerning the workshop, please contact us or comment on this post and we will get you in touch with Mr. Walker (due to possible spam issues we are not posting his e-mail address here).  If you are interested in participating, please get in touch posthaste to ensure your inclusion in this most unique opportunity.  For any of you who might not be able to attend the entire workshop or who are interested in learning about working with leather without investing in an entire pair of shoes, a general leather stitching class on Saturday, August 20 is being offered to the public for a nominal fee and is also still open for registration.

For those of you who are unable to attend, be sure to check back here for updates during the workshop!
Posted by Ashley at 6:51 PM 3 comments:

Finding the Faces of Pride and Prejudice in San Francisco

I'm currently on a two-week trip to CA for a conference and am taking advantage of my time here to visit with some west coast friends I rarely get to see. On Thursday, my friend Kathey and I took a trip into San Francisco to see the SFS perform Music for the Royal Fireworks and both Vivaldi's and Piazzola's Four Seasons, the latter two with Lara St John. It was fantastic, and by far one of the best performances of the Four Seasons I've ever heard, either live or recorded.

But anyway, I digress. Before the concert, we stopped by the Legion of Honor to see the Dutch and Flemish masterworks exhibition currently on display there (quite lovely and worth the trip if you live close enough to go!). After spending some time in there, we explored the rest of the museum and Kathey (who has been to the LOH numerous times before) brought me to what she fondly calls the "Pride and Prejudice" room.  Hung entirely in European (mostly British) portraiture from the eighteenth and early nineteenth centuries, this one particular gallery contains within it faces which look curiously familiar.  Bringing me from one portrait to the next, Kathey would say, "And who's this?" and somehow my answer was always consistent with hers.  It was such fun that I thought I'd share our little adventure in character-finding with you.  See if you can't identify which fictional characters from Pride and Prejudice we found so eerily reflected in these well-known portraits of real people from the past!

First we encountered this gentleman: 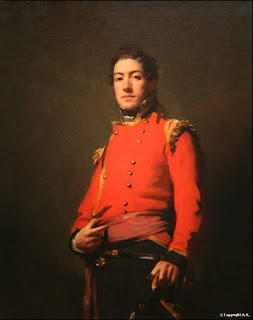 Sir Duncan Campbell, Bart., by Henry Raeburn (1812).
Image linked from worldvisitguide.com.
﻿Look familiar?  What about this chap, who we discovered peering at us from the opposite side of the doorway? 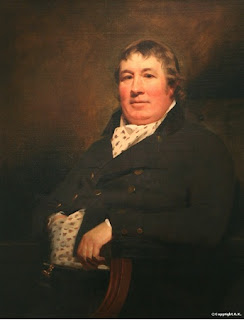 Alexander Carre of Cavers, by Henry Raeburn (1802).
Image linked from worldvisitguide.com.
Hung directly to his right (rather condescending of him, don't you think?) was this dashing gentleman who I am sure you must know by sight: 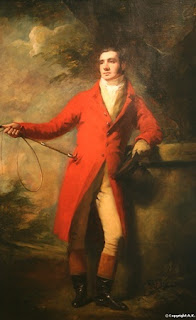 Sir William Napier, Bart., by Henry Raeburn (1811-21).
Image linked from worldvisitguide.com.
Imposingly displayed in another corner was this lady, painted in her youth, of course, and oh-so-appropriately by none other than Sir Joshua Reynolds: 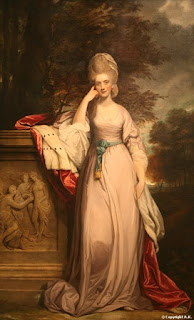 Anne, Viscountess Townshend, by Sir Joshua Reynolds (1779-80).
Image linked from worldvisitguide.com.
And opposite her, we espied this fine looking pair (it looks like they've risen quite nicely in the world, doesn't it?): 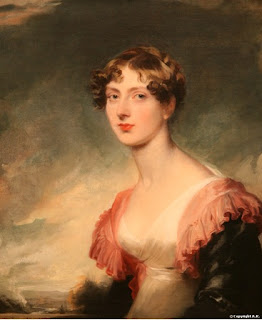 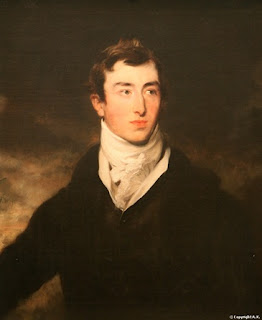 Other Archer, Earl of Plymouth, by Thomas Lawrence (1817).
Image linked from worldvisitguide.com.
I hereby issue a challenge to you all, dear readers, to put forth your suppositions as to the identities of these fair-faced personages!  A rousing "Huzzah!" to anyone who can identify them all!

Incidentally, Jane Austen herself also enjoyed the pastime of searching out the faces of her fictional characters in the real-life portraits of her contemporaries.  In a letter to her sister Cassandra on 24 May 1813, she wrote:

"Henry and I went to the exhibition in Spring Gardens. It is not thought a good collection, but I was very well pleased, particularly (pray tell Fanny) with a small portrait of Mrs. Bingley, excessively like her.

I went in hopes of seeing one of her sister, but there was no Mrs. Darcy. Perhaps, however, I may find her in the great exhibition, which we shall go to if we have time. I have no chance of her in the collection of Sir Joshua Reynolds's paintings, which is now showing in Pall Mall, and which we are also to visit.

Mrs. Bingley's is exactly herself -- size, shaped face, features, and sweetness; there never was a greater likeness. She is dressed in a white gown, with green ornaments, which convinces me of what I had always supposed, that green was a favourite colour with her. I dare say Mrs. D. will be in yellow."
Jane Austen's Letters, p. 212

The actual portrait Austen singled out as very like "Mrs Bingley" in green ornaments has been identified as "Portrait of Mrs Q (Mrs Harriet Quentin)," by William Blake.  Although our Mrs Bingley isn't sporting green, we felt pretty confident that she was quite fond of pink as well, and that Mr Bingley certainly loved her enough to commission two portraits, at the very least.  :-) 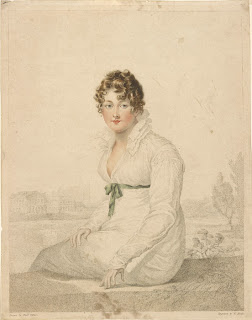