Encountering "Anna Karenina" on the Streets of NYC

Last weekend, I went with my mum and a couple of family friends to see the Radio City Christmas show in NYC, which is celebrating the 85th anniversary of the Rockettes this year (more on that - with some pretty cool costume pictures - in an upcoming post!).  After the show, we wandered around Rockefeller Center, previewing some of the window displays just going up for the holiday season.

As we strolled past Banana Republic on Fifth Avenue, this just happened to catch my eye: Does it look familiar?  It's the "poster gown" from the new Anna Karenina film, starring Keira Knightley and Jude Law! 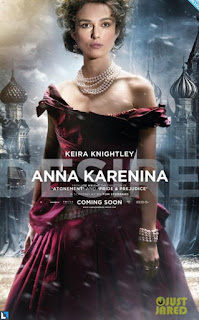 The display included three costumes from the film: Anna/Keira Knightley's red gown, Vronsky/Jude Law's white uniform, and the gorgeous pearl grey ensemble with fur accessories below.  These are being showcased to complement and promote Banana Republic's new fall line, conceptualized by Anna Karenina's costume designer, Jacqueline Durran, and inspired by the 1870s-esque Russian fashions featured in the movie. Close-up of the bodice of the gown.  My apologies,
I couldn't get away from the reflective glare on the glass!

I haven't yet seen the film, but I've been following the tidbits trickling out about the costumes, and I have to say that I'm both intrigued by and incredibly skeptical about the approach the production has taken to its period setting.  Rather than doing a strict "costume drama" depiction of 1870s Russia, the film's designers elected to adopt a more interpretive stance, translating rather than transcribing the period fashions and sets to the screen.

Costume designer Jacqueline Durran wanted to represent the indulgent luxury of Anna's world in the character's dress style and appearance; as a member of Russia's social elite who moved in aristocratic circles, Anna Karenina kept abreast of the latest European trends.  Durran wanted to reflect Anna's height-of-fashion opulence in a way that would speak to both her unique identity as a nineteenth-century character, and as a technique to convey that chic luxuriousness to modern audiences. 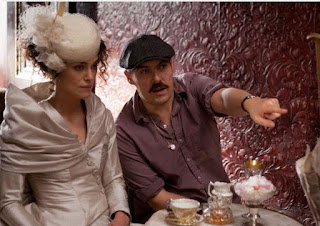 Anna/Keira Knightley with director Joe Wright on set.  This is a
nice example of Durran's fusion of 1950s couture with the look
of the 1870s.  Does it work?  I'm not yet convinced...
Image linked from IMDB.

In an interview on the film's official website, she describes the thought process that justified her approach as follows:


"I thought that Joe [Wright]'s idea was genius because a lot of 1950s couture was itself looking back to an earlier time.  We looked at some images from the time next to fashion pictures from the 1870s and although there were eight decades apart, the two periods meshed together very well.

"We associate 1950s couture with chic elegance, and so this would be a signifier to the audience and a way in for them to the image Joe wants conveyed.  With Anna, I did keep an 1870s skirt shape all the way through - while pushing the bodices in the direction of the 1950s.  There is also a 1950s feel to several of the other costumes, such as Anna's gray silk jacket - it's very much a 1950s jacket shape, with buttons down the front, although even this is paired with an 1870s skirt." Durran goes to describe how the asymmetrical lines of a number of Anna's gowns (you can see it clearly in the red example here), along with their clever folding and draping of fabrics into elaborate necklines and bustles, were intended to pay homage to 1950s French couture, while keeping it in the restricted realm of being a clearly stylized element of an 1870s costume.  She also notes how she used color strategically throughout to reflect Anna's changing social and emotional status.  At the beginning, trapped in the stifling world of Karenin's social circle, her clothes exhibit a darker palate; as she falls in love with Vronksy and is swept into their whirlwind romance, the tone of her clothes becomes correspondingly lighter.  With the disintegration of her relationship with her lover, however, and her descent towards her tragic end, her outfits once more become somber, mirroring the intensity of her dark, brooding mood (this red gown, as you might expect, comes at the climax of the film). As I said, I have yet to see the movie, so I'm reserving judgment until I can see how these costumes work with the overall concept and look of the piece on screen.  These looks make my fashion heart go pitter patter, but my historical costume head replies with sadness at the lost opportunity for some pretty incredible truly accurate period pieces.  We'll see...
Has anyone seen the movie yet?  What did you make of the costumes?  Did you think the "fusion" of periods worked with the overall production?
﻿
Posted by Rebecca at 7:33 PM

I haven't seen the film, but I have to say that when I watched the trailer I was very disappointed in the costumes. This is the first I've heard of the 1950s influence on the designs (although I confess that I haven't really looked into it!). My impression after viewing the trailer was that the modern-meets-1870s thing was so stylized that it didn't appeal to me at all. I'll be curious to see what you eventually think about it.

I feel quite the opposite those costumes are astonishing and exquisite - the designer will be nominated for an academy award, and that is the way to go!

I agree with Quinn... costumes are nice and interesting but really NOT contemporary victoran dresses...

Yes, I am not sure that I am ready to see a marriage of 1870 fashions to 1950's fashions - it might make for a bit of a nightmare. My all time favorite version of Anna Karenina is 1998 w/Sean Bean and Sophie Moreau, the qowns are exquisite and wonderfully period correct. I will probably go see this version, just because I love all period pieces. The way this was shot was all inside ONE building, made me think they are looking to see if it might translate to a theater production at some point in time in the future.

D'Nalof, I couldn't agree more - that 1998 version was a stunning piece of costume and set work. My favorite "Anna Karenina" adaptation story-line-success-wise, though, has to be the Masterpiece Theatre version with Helen McCrory and Kevin McKidd. The costumes in that were quite good as well (though obviously (necessarily) on half the budget of the Sean Bean film!), and it came closest overall to approximating what I'd envisioned when I read the novel.

I'm with anon. While I haven't seen the movie yet and I do love accurate period costumes, I like it when a costume designer deliberately sets out to blend two periods to create a particular effect. (With caveats - for example, I didn't like it in Becoming Jane, where Jane dressed ~15 years later than everyone else.) A designer just failing to do good research is something else altogether from that.

The costumes were stunning!