**We began this series back in August, 2014 but life - oh, crazy, crazy life! - took over and finishing it went woefully neglected for over a year.  Well, we're back now and ready to resume the chronicle of our (last) summer vacation adventures.  Better late than never, eh?!  If you missed the previous posts in the series recounting our PEI 2014 trip, you can find them here and here.** 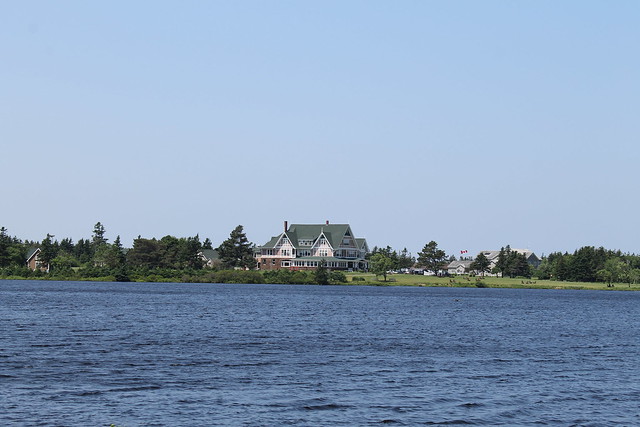 It isn't often that you can actually stay at a place that has both hosted royalty and been featured in some of your favorite movies and tv series, but Dalvay-By-the-Sea is one of those unique places.  Best known as the "White Sands Hotel" in the Sullivan Anne of Green Gables movies and on the Road to Avonlea series, historic Dalvay is owned by Parks Canada and operated as a small summer hotel and restaurant.  It is located on Prince Edward Island's beautiful north shore, within the boundaries of Prince Edward Island National Park, which means that the shoreline on which it sits, along with all of the surrounding area, is protected from development, keeping it pristine and looking just like one imagines it must have looked back when the beautiful mansion was built. 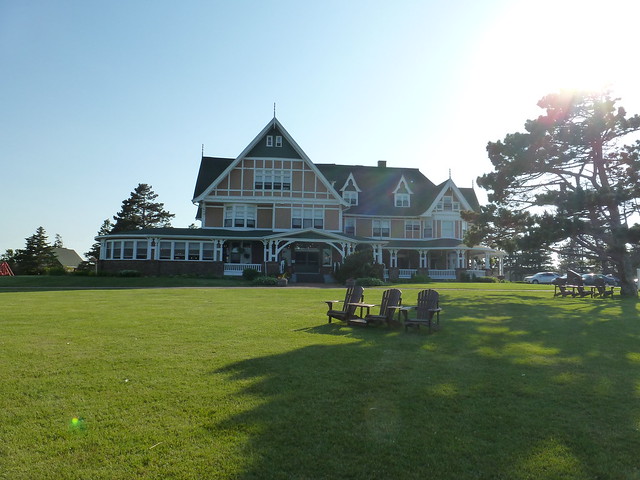 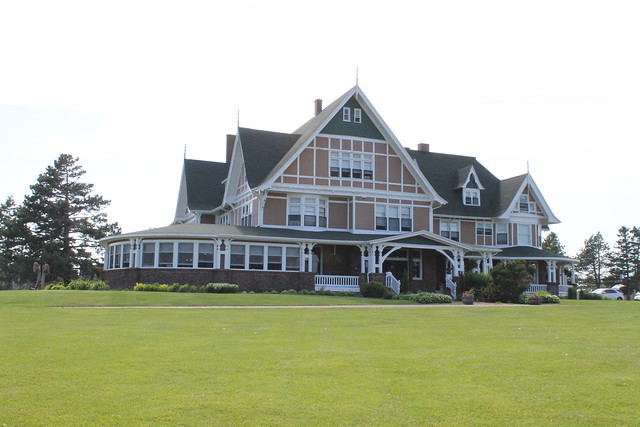 The mansion was built in the Queen Anne Revival style, almost entirely out of locally-sourced materials.  The exterior facade and the interior fireplaces, for instance, are all local sandstone, retaining that beautifully distinctive red tint for which PEI soil is so famous. 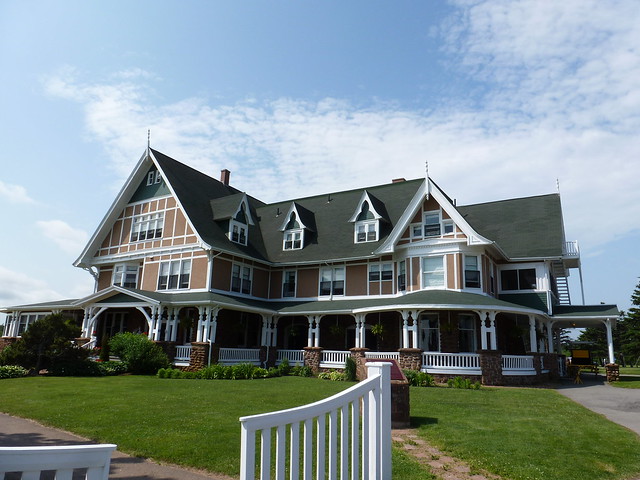 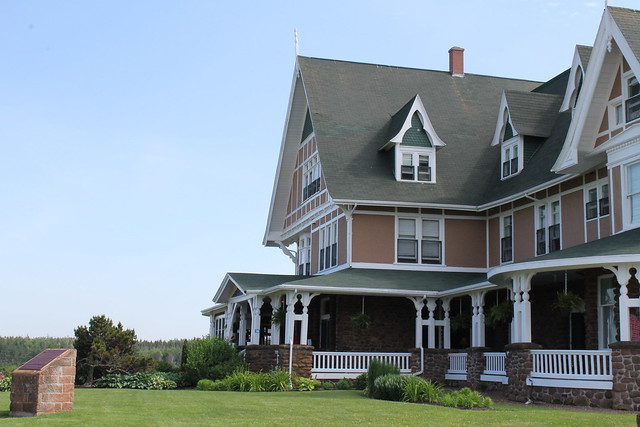 Dalvay-By-the-Sea's story is a fascinating (and rather sad) tale of an American oil fortune, two high society beauties, and fallen European royalty.  The mansion house was built in 1895-6 by wealthy American businessman Alexander MacDonald, who once served as president of John D. Rockerfeller's Standard Oil Company.  MacDonald was born in Scotland, and PEI immediately impressed him with its charm, natural beauty, and nostalgic reminders of his homeland.  On his first visit to the Island, he purchased 120 acres of land on the north shore on which to build a summer retreat for his family, christening it "Dalvay" in memory of his boyhood home of the same name.  Annual costs to maintain the summer home were reportedly upwards of $10,000 a year.  Much of this went to maintain a large household and groundskeeping staff, who were always on hand to serve not just the family, but the ever-increasing flow of guests who helped to make Dalvay's summer parties so legendary. 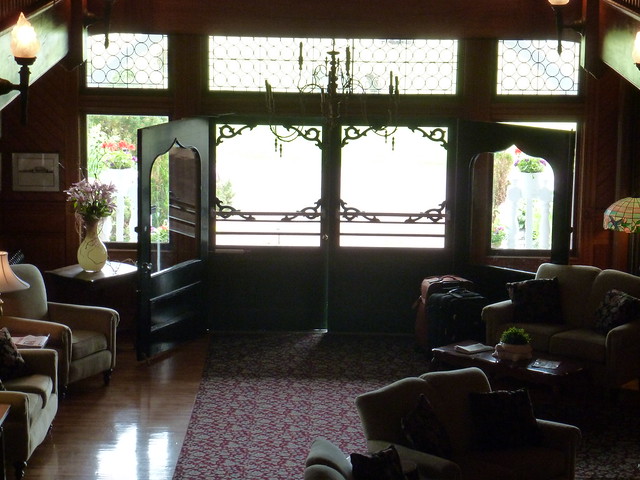 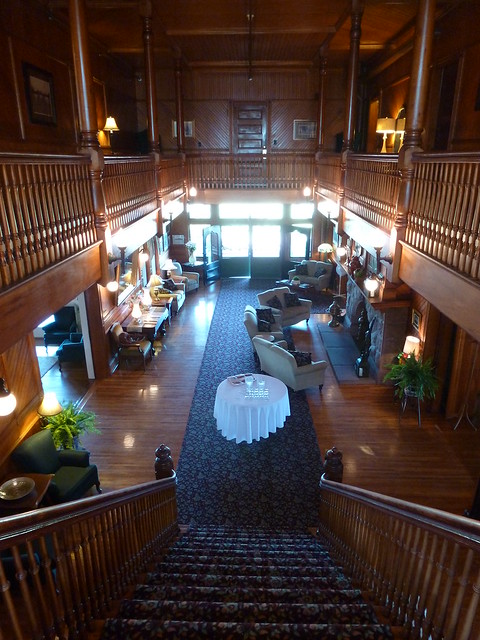 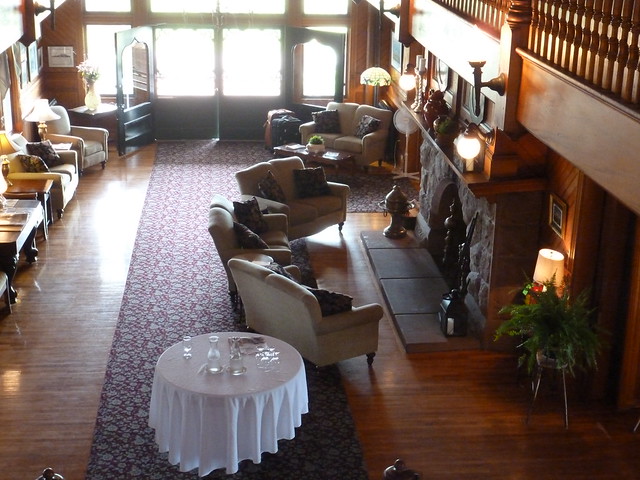 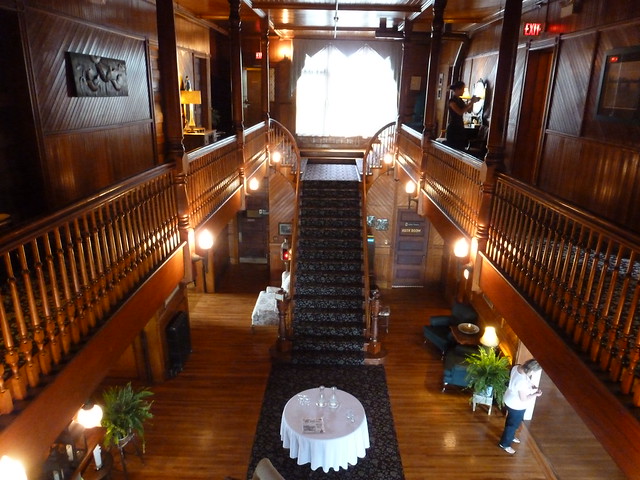 MacDonald's only daughter died young, leaving him to raise his two granddaughters, Helena and Laura.  The family enjoyed a number of happy summers on the property until 1910, when MacDonald passed away, leaving the house in trust to his two beloved granddaughters.  Their $15 million inheritance reportedly elevated them to two of the wealthiest young heiresses in pre-WWI worldwide high society.  Both girls made socially brilliant marriages as a result of their new status: Helena married Prince Murat of France, while sister Laura married Italian Prince Rosspiglioisi.

Their massive family fortune remained legally under the management of their father, however, and sadly, poor investments on his part all too quickly decimated the family funds.  Both girls were divorced by their respective spouses after they lost their fortunes.  Laura moved to NY and worked for the remainder of her life to support her two children, and penniless Helena passed away at only 38 from cancer.

With Laura no longer capable of maintaining the vast and remote estate, Dalvay had to be sold.  It passed through a number of hands (at one point, house, furniture, and land were all sold to the caretaker for a mere $486.57, the cost of the back taxes) until 1937, when George Deblois purchased it and then sold the house and property to the Canadian government to be integrated into the newly-established Prince Edward Island National Park.  The house itself is also a Classified Federal Heritage Building.

Dalvay's official history and gallery pages have some really neat historical photographs, if you're interested in seeing what the house and grounds looked like in their heyday around the turn of the century.  Not much has changed, comparatively, and today, images like these of Dalvay in days past are displayed throughout the hotel, so you really get a sense that you're standing in history just by being there.  The lobby also has several large albums available for guests to peruse that are chock-full of photos and press clippings chronicling every aspect of the estate's life and times. 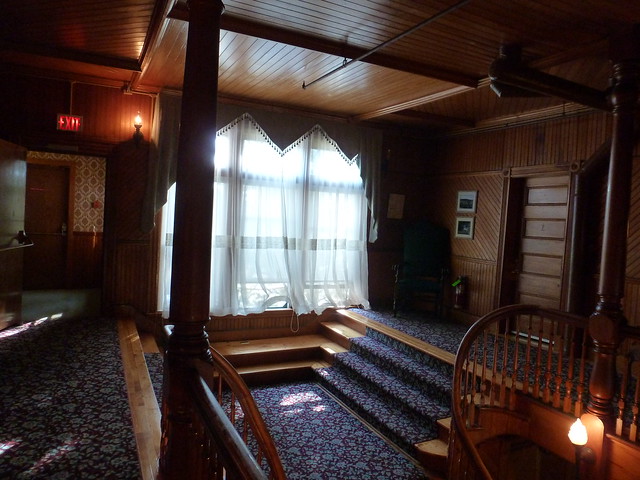 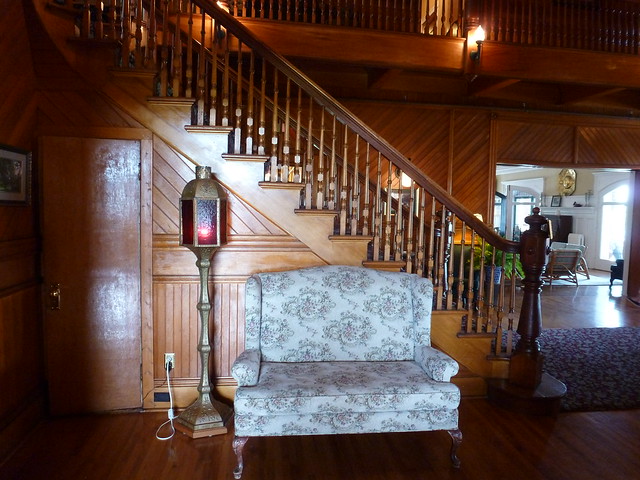 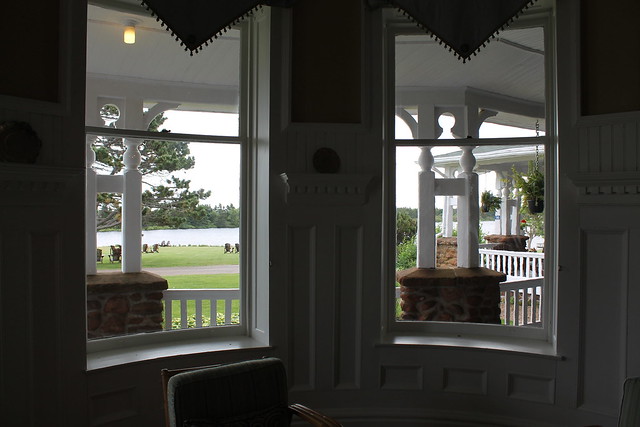 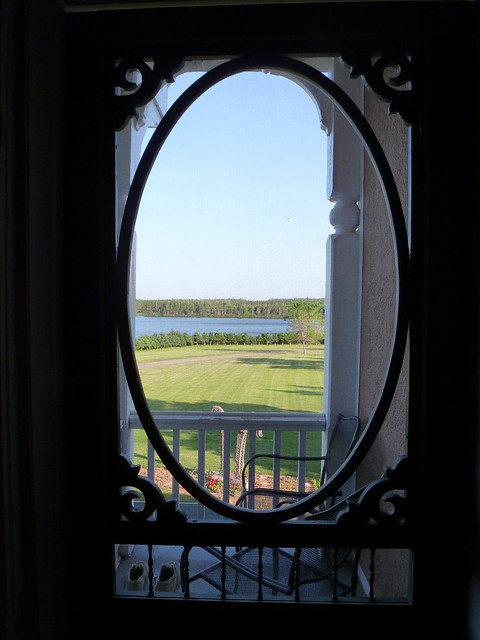 Our room was the only one with a balcony!

On their tour of Canada in 2011 not long after their wedding, Prince William and Kate visited PEI for several days and stayed overnight at Dalvay.  Not a bad honeymoon spot, with views like these from your window every morning! 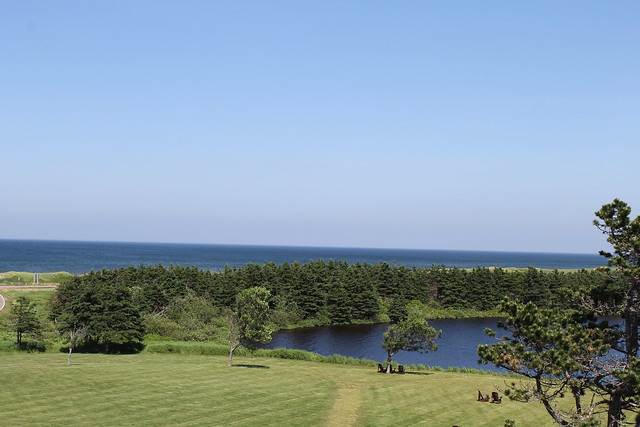 A view from our balcony, overlooking the grounds. 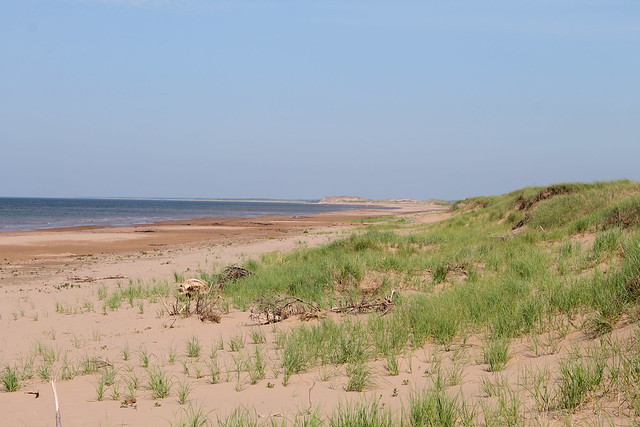 We had grand plans to make ourselves full 1908-1914 wardrobes for this trip (1908 because it's the year Anne of Green Gables was published and 1914 because, well, it seemed the sensible pre-war fashion end date and it was 2014, so...).  All of our source and citation material was compiled and all of the fabric, hats, parasols, shoes, and other materials were acquired and I had started cutting...and sewing...and sewing...and got as far as finishing one hat, (almost) both corsets, and cutting out both of our combinations.  And that was it.  *sigh*

In other words, of course, we bit off way more than we could chew, forgetting how difficult and time-consuming it always is to research and then build an entire outfit from the skin out when you're dealing with an era that's entirely new to you.  So all that dreaming about lounging on the porch of Dalvay sipping tea in a broad-brimmed hat loaded with flowers...and all that scheming about lawn bowling in the shadow of the hotel dressed in 1909 lingerie dresses...yeah.  Didn't happen.  Oh well.  I guess there's just going to have to be a "next time" to take care of all that unfinished business.  Not that we need an excuse, mind you...  ;-)  Anyone else up for a costumed frolick across PEI?!

So in the meantime, here's to dreaming ourselves back in time... 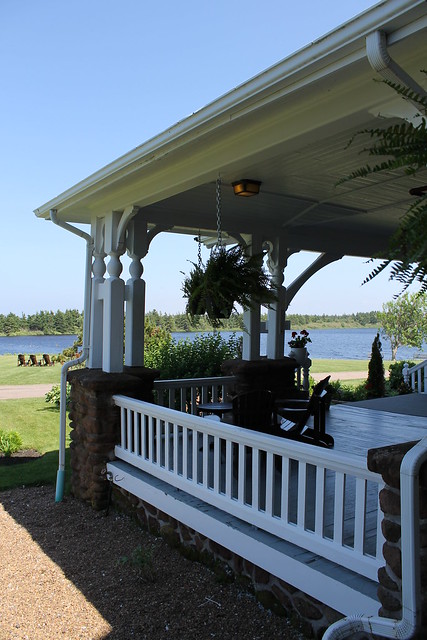 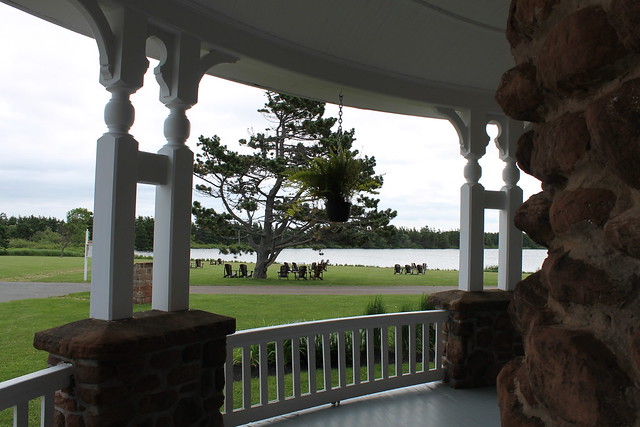 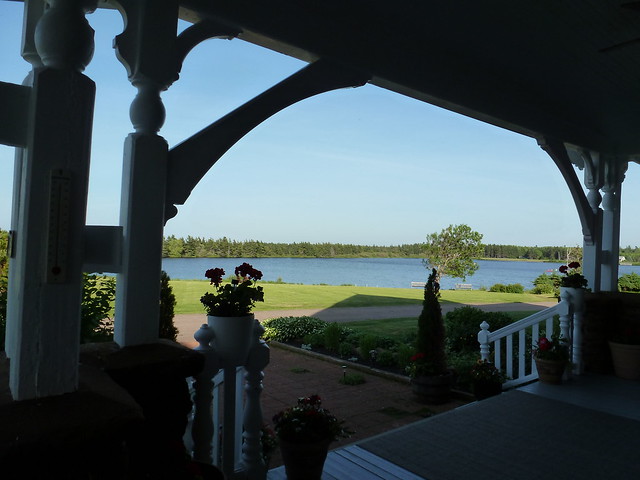 Additional photos can be found in our PEI 2014 album on flickr.

If you're interested in staying at Dalvay, the hotel offers 25 guest rooms within the main mansion house, along with eight three-bedroom cottages on the lakeside.  Both inn and restaurant are open seasonally from June through October.  Reservations can be made by visiting their website.
Posted by Rebecca at 1:47 PM

Very nice work
I invite you on my blog of old magazines and old french sewing patterns
http://mode.femmes-1900.com/en/
Regards

I have put on my site, a lot off old french sewing patterns and magazines.
http://www.french-crea-vintage.com/en/

I gotta bookmark this website it seems extremely helpful very useful. Thanks for sharing.

The blog was actually fantastic! Lots of abundant advice and inspiration, both of which we all need! 경마사이트

Great information, thanks for sharing it with us 릴게임

Wohh exactly what I was looking for, regards for posting 토토사이트

"Can I simply just say what a relief to find a person that genuinely understands what they are talking about on the internet.
You definitely know how to bring an issue to light and make it important.
A lot more people ought to check this out and understand
this side of your story. It's surprising you are not more popular because you definitely have the gift."

It’s remarkable to go to see this web site and reading the views of all mates about this paragraph, while I am also eager of getting know-how.오피

I’m impressed, I must say. I’m here for the first time. Superb! I simply must tell you that I really love your blogs page. My boyfriend enjoys your blogs.외국인출장

As I apply more and more of these insights to my daily life I can see how your education has transformed you into a top expert in this industry. I talked about these very points to my professor today and she couldn’t argue any of these points. After seeing this I know I will not be the same. Be cool if you were close to me so we could hang. I don’t know why but this site takes almost a minute to fully load on my friends laptop. Reading your content is way better than snuggles.마사지

Extremely instructive post ! There is a great deal of data here that can enable any business to begin with a fruitful interpersonal interaction campaign. 온라인카지노

What a truly magnificent post this is. Genuinely, outstanding amongst other presents I've ever seen on find in as long as I can remember. Amazing! 바카라사이트

Exceptionally marvelous!!! When I look for this I discovered this site at the highest point of all websites in web crawler. 카지노사이트

I am someone who works on the web. Sometimes I like to visit overseas sites casino online when I have time. Among them, I like the site related to , but your site seems to be optimized for too!! Very good

Simply desire to say your article is as amazing. The clearness on your post is simply spectacular and that i could assume you are a professional on this subject.
온라인카지노

Your blog is really nice. Its sound really good
스포츠토토

Thank you for providing a good quality article.
카지노사이트

Unbelievable!! The problem I was thinking about was solved.카지노사이트You are really awesome.

What an interesting story! I'm glad I finally found what I was looking for 메리트카지노.

Your ideas inspired me very much. 메이저토토사이트모음 It's amazing. I want to learn your writing skills. In fact, I also have a website. If you are okay, please visit once and leave your opinion. Thank you.

You made some good points there. I did a Google search about the topic and found most people will believe your blog. 먹튀검증

I've been looking for photos and articles on this topic over the past few days due to a school assignment, 파워볼사이트 and I'm really happy to find a post with the material I was looking for! I bookmark and will come often! Thanks :D

I came to this site with the introduction of a friend around me and I was very impressed when I found your writing. I'll come back often after bookmarking! 먹튀검증

It's the same topic , but I was quite surprised to see the opinions I didn't think of. My blog also has articles on these topics, so I look forward to your visit. 토토사이트

Many thanks for the article, I have a lot of spray lining knowledge but always learn something new. Keep up the good work and thank you again. 먹튀사이트

I’m thinking some of my readers might find a bit of this interesting. Do you mind if I post a clip from this and link back? Thanks 먹튀검증

I'm so happy to finally find a post with what I want. 안전놀이터순위 You have inspired me a lot. If you are satisfied, please visit my website and leave your feedback.

What a post I've been looking for! I'm very happy to finally read this post. 토토사이트 Thank you very much. Can I refer to your post on my website? Your post touched me a lot and helped me a lot. If you have any questions, please visit my site and read what kind of posts I am posting. I am sure it will be interesting.