"Married in white, you have chosen all right"

After living in England for two years, and being a fair specimen of the traditional American Anglophile, I'll admit to being something of a (very) casual Royals watcher. As most of you have probably already heard, the engagement between Prince William and Kate Middleton was officially announced today, so we thought this would be a welcome opportunity to swoon over some of the many famous British royal wedding gowns from the past (after all, we're always looking for excuses...!).

In December 2002, during a family Christmas vacation (er, holiday!), Ashley and I had the luck to visit Kensington Palace during a special exhibit, "A Century of Queens' Wedding Dresses 1840-1947," showcasing a number of royal wedding gowns, including Queen Victoria's (1840), Queen Alexandra's (1863),  Queen Mary's (1893), Queen Elizabeth the Queen Mother's (1923), and Queen Elizabeth II's (1947). I was also fortunate enough to see Princess Diana's wedding dress in a 2006 exhibit of some of her most famous gowns, also at Kensington Palace.  Of course, photography was not permitted in the Palace or either of the exhibits so I don't have any photos of my own, but I've scoured the internet this morning to collect together some images - many from the 2002 exhibit - of these iconically gorgeous royal gowns to post and sigh over in honor of today's most recent royal engagement.

Please note that I do not claim the rights for any of these images.  One click on them will take you immediately back to their original online homes, where all credit for them appropriately resides.

Queen Victoria's wedding portrait (1847),
by Franz Xaver Winterhalter, given as an
anniversary gift from the Queen to Prince Albert.
Queen Victoria's 1840 wedding gown was famously of creamy white Spitalfields silk trimmed in Honiton lace and embellished with orange blossoms.  Instead of a tiara, the young twenty-one-year-old royal bride wore a wreath of orange blossoms (a tradition introduced in France and carried forward by a number of other English royal brides) over a veil of almost two yards of exquisite and specially-designed lace.  She is believed to be the first English bride to wear a veil.  On her breast was pinned a sapphire and diamond brooch, a wedding gift from Prince Albert.  Contemporary accounts of the wedding gushed, with true Victorian sentiment, over the finery of the Queen's bridal gown and the attire of her attendants, who also wore various shades of white.  This article from Victorianamagazine.com provides a glimpse into these and many other details from that momentous day.

The Marriage of Queen Victoria (1840-2), by Sir George Hayter.
Famously credited now with introducing the fashion for white wedding gowns, Queen Victoria's silk-and-lace confection is owned by the Royal Collection and can occasionally be seen as part of special exhibits at Kensington Palace.

Queen Victoria's wedding gown (1840), on display at Kensington Palace.
The veil in the photograph is not original to the gown.
When preparing for the 2009 film The Young Victoria, costume designer Sandy Powell visited the Kensington Palace costume collection to examine the wedding gown and a number of other original garments owned and worn by Queen Victoria.  Some of her original sketches for the film's Academy Award-winning costumes can be seen here.  I've also found a set of flickr photos of the costumes on tour, which you can view here.  A couple shots of the reproduction wedding gown are linked directly below. An official wedding photo of the new Princess of Wales with her
husband Prince Albert Edward.
Eighteen-year-old Princess Alexandra wore a gown draped in Honiton lace and garlands of orange blossoms.  Her silver moire train was so long it had to carried by eight bridesmaids.

The Marriage of the Prince of Wales (1863-5), by William Powell Frith.
For ease of movement and to make the gown serviceable on subsequent occasions, Queen Alexandra simplified it by removing some of the heavier frills and overskirts.  The current state of the gown, below, reflects these alterations.

Queen Alexandra's wedding gown (1863), as displayed in
the 2002 exhibit of royal wedding gowns at Kensington Palace.

For her wedding gown, Princess Victoria Mary personally selected a white silk satin brocade with a silver threaded design that intertwined roses, shamrocks, thistles, lilies of the valley, and orange blossoms.  Three flounces of Honiton lace (originally worn by her mother) were arranged at the front of the skirt, while the long train remained plain and unembellished.  She wore her mother's Honiton lace veil, secured with a bunch of orange blossoms and several diamond pins.

Queen Mary's wedding gown (1893), as displayed in  the
2002 exhibit of royal wedding gowns at Kensington Palace.

The Queen Mother's choice of wedding gown very much reflected the style of the day with its simple skirt and its dropped waist.  Made of silk crepe moire, the dress featured intricate rows of pearls in front accented by silver embroidery.  It also had a surprisingly short train, fashionable for the period but unique at the time amongst traditional royal bridal wear. 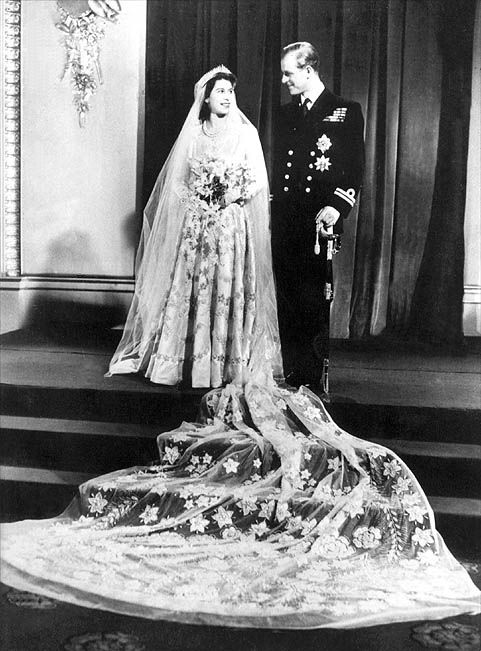 An official wedding portrait of the future Queen Elizabeth II
and the nearly created Duke of Edinburgh.
When Princess Elizabeth, the future Queen Elizabeth II, married the Duke of Edinburgh in 1947, her Norman Hartnell hand-embroidered ivory silk satin gown boasted a thirteen-foot train embellished with over 10,000 pearls and crystals arranged in an intricate floral garland and star pattern.  Crowning her lace veil was a 1919 diamond tiara originally made for Queen Mary.  She carried a bouquet of white Cattleya, Odontoglossum, and Cypripedium orchids. In celebration of her 60th wedding anniversary in 2007, the Queen's gown, veil, and shoes, her wedding jewels, the Duke of Edinburgh's Royal Navy uniform, and a number of their wedding gifts were collected into a celebratory exhibit, "A Royal Wedding," at Buckingham Palace.  The photo above represents the gown as displayed there, while the one below captures its splendor from a different angle at the Kensington Palace exhibit from 2002. And just how did the heir apparent afford such a gown as a war-time bride?  Rumor has it that like any other hopeful bride of the period, she carefully saved her clothing rations coupons!  For more about the details of the wedding day of Queen Elizabeth II (including some truly marvelous close-up photos of the gown), take a look at the Royal Collection's official "A Royal Wedding 1947" website.
29 July 1981: Lady Diana Spencer (Diana, Princess of Wales)

Diana's formal wedding portrait, linked from Gettyimages.
﻿What frolick through the princess diaries of wedding gowns would be complete without a glimpse of the iconic Emaneul wedding gown designed for Princess Diana?  The hand-woven ivory silk taffeta gown, with its famous twenty-five cathedral train, was trimmed with antique lace and over 10,000 pearls and mother-of-pearl sequins attached with gold thread.  Lady Diana wore her veil (even longer than her train) secured to a Spencer family tiara. Diana's 25-foot train, laid out to its full length in the "Diana: A Celebration"
touring exhibit.  This photo is linked from their website.
When not touring as part of "Diana: A Celebration" (as seen in the second and third photos above), Diana's gown is on display at Althorp, the Spencer family home.  For more on the gown from conception to creation to its debut on that special day, check out this page from the touring exhibition's stop in Dayton, and the Emanuels' book, A Dress for Diana. To see more images, photographs, accessories, souvenirs, and gifts from all of these royal weddings, please visit Royal Weddings 1840-1947, the exhibition page on the official Royal Collection website.
Posted by Rebecca at 11:35 PM

(swoon) How beautiful! And to think that you two got to see them! I wonder what the next royal gown will look like?
Laurie

Wow, all of them are lovely!

One hopes the new princess will choose a gown with straps or sleeves instead of caving to the current fad for strapless gowns.

I'm pea green with envy that you saw these in a display. Love your site!

Thank you for this fabulous article! This is definitely the most comprehensive Royal Wedding post I've found online, especially with all those wonderful photos.

Well, Thanks for sharing such a informative content with us.

Yeah I completely agree that wedding is really special for most of couples. We are going to celebrate our first wedding anniversary at a local event space. Thanks for this wonderful post and ideas. Will definitely use them.