A Round Eared Cap, 1760-1780
"And so, when I had dined, up stairs I went, and locked myself into my little room.  There I tricked myself up as well as I could in my new garb, and put on my round-ear'd ordinary cap; but with a green knot, however, and my home-spun gown and petticoat."

Samuel Richardson, Pamela, or Virtue Rewarded (1740)
The "round-eared cap," fashionable for all socio-economic levels from the 1740s into the 1780s, has a fairly high crown and a shaped brim that "rounds" around the face from ear to ear.  Both brim and ruffle are styled to be narrowest at the peak of the cap, and then to flare gradually as they curve down to the sides of the head.  The ruffle, which can be single or double, can be either pleated or gathered to the brim and can vary in width depending on decade and personal preference. 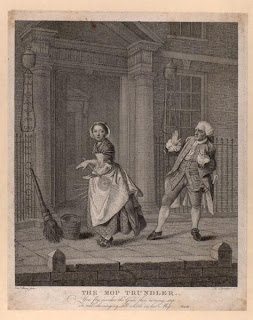 "The Mop Trundler," attributed to Edward Penny (undated,
approx. 1770-1780).  The young woman is dressed very fashionably,
from her buckled shoes to her Marseilles petticoat to her round eared cap. 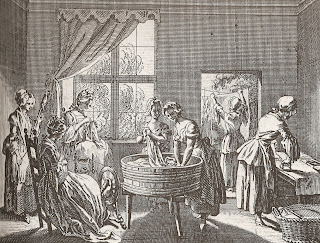 "Women's Room for Sewing, Washing, and Ironing," Daniel Chodowieki,
1770.  All of the women wear round eared caps.  Some appear to be
decorated with ribbons, while others are worn plain.
(image scanned from An Elegant Art)
The pattern: This cap is largely based on the Kannik's Korner cap pattern, view A, with some modifications described below.  I was very impressed by the options, the detailed instructions, and the thorough documentation provided with the pattern, and I highly recommend it.
One further note: for those interested in drafting their own cap pattern (since of course different patterns suit different facial types better than others!), Sue Felshin's "How to Make a Cap" website is an excellent resource. Construction Details: The cap is entirely hand-sewn. Each piece of the cap (caul, brim, and ruffle) is finished seperately with a narrow hem. The caul is then gathered to fit the headpiece and the two pieces whipstitched together. Though few original caps from this period survive, extant examples suggest that the brim was not typically doubled, with the ruffle and caul sandwiched between, as has become the norm in many caps reproduced for re-enactors.  A single-layer brim was instead hemmed and butted-and-whipped to the caul and the ruffle in original examples, as it is here, which creates a lighter, less bulky cap. The semi-sheerness of the fabric also makes the tiny hems visible on each piece, a look which I find very pretty. I really need to remember to take in-process photos to help illustrate the assembly steps! I ended up making the caul slightly smaller and the brim a bit more narrow and a tad shorter to accommodate my head size.  I also wanted a bit of hair to be visible all the way around the cap, as is fashionably appropriate to every social level.
I also narrowed and re-shaped the patterned ruffle ever so slightly and decided to pleat rather than to gather it to the brim.  The pleats are pressed to hold their shape. This is a very easy project, though time-consuming if you're doing it by hand because fine sewing is a must with something as prominent, face-framing, and immediately eye-level as a cap. If you spend your hand-sewing time anywhere on your outfit, let it be on your cap!


The fabric: White handkerchief-weight Irish linen.  The ties are cotton tape.  Because this was a cap style that was worn by all levels of society, it was the fabric choice - and not the pattern - that reflected socio-economic standing.  An everyday round-eared cap worn by an upper-class lady would have been made with a fine linen or cotton, with lace and/or silk used for more formal occassions.  A cap for a middling-class women might have been in a marginally less-expensive linen (like mine), while one worn by the working class was made using a more coarse linen fabric. Finishing the look: Even middling and working class women - not just their social betters! - often embellished their caps with ribbons, which were either pinned, tacked, or tied into place. These could easily be changed to coordinate (to the degree that eighteenth-century women ever coordinated!) with any outfit.
Stay tuned for Part II of the eighteenth-century caps series, coming soon to Threaded Bliss!
Posted by Rebecca at 4:20 PM

The cap looks great! I don't think I'm ready to venture into that yet. I love the ones made with the fancy fabrics for the upper class.
Laurie

Your cap looks nice and neat. Interested to read it was choice of fabrics that denoted the class.