Finding a Voice: The King's Speech

Yesterday, we finally (finally!) managed to see The King's Speech, which we've been dying to get to ever since its Christmas release.  After weeks of being teased by the tv previews that were the cruelest of taunts because it wasn't playing anywhere local, and then after another couple of weeks of being just-plain-too-busy to be able to go once it *was* playing nearby, we finally got ourselves (and our mother!) there.  It was well worth the wait!  The film is superb, beautifully filmed, and wonderfully understated.  Definitely a must-see. For those of you unfamiliar with the story, The King's Speech explores the relationship between King George VI (the father of the present Queen Elizabeth II, known to his family as "Bertie") and Lionel Logue, an unconventional speech therapist enlisted by Bertie's wife to help her husband learn to cope with a speech impediment that made public speaking for him a torturous experience.  The film focuses on the years between 1925 and 1939, covering some of the world-altering events that demanded a very public reaction from Bertie.

The second son of King George V, Bertie only ever intended to live out his life in relative privacy with his wife and daughters.  The scandalous 1936 abdication of his older brother, Edward VIII, however, demanded Bertie assume the throne and thrust him into a public spotlight he neither sought nor relished.  As the newly crowned George VI, he was forced to confront the increasingly threatening situation with Hitler amidst a tide of popular opinion still decidedly in favor of his older brother - even in spite of Edward's thinly veiled Nazi sympathies.  Recognizing the country's need of a strong and inspiring leader, George VI responded with a speech declaring war on Germany on the 3rd of September 1939 and urging courage, strength, and unity from his people in the face of the difficult times ahead.  Logue stood by the king's side, assisting him through this and every subsequent wartime radio broadcast and public speech. 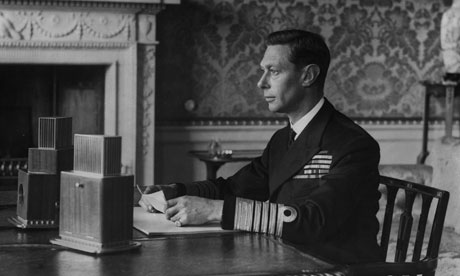 King George VI on 4 September 1939, the day after "the king's speech"
that declared war on Germany.
To hear the actual "king's speech" from 3 September 1939, click here.  As the film explains, Logue helped George VI develop the steady, measured style that you hear, a technique that offered a way around the king's nervous stammer.  In a NPR interview, the film's director, Tom Hooper, explained how he and Colin Firth (who plays George VI) watched and listened to hours of archival records of the king speaking, and were both "extremely moved" by the effort and pain the king's halting voice and expressions reveal.  The pauses actually come across as quite dramatic in the original audio file, and you can hear the subtle influence of this speech style in the present queen's way of speaking in public, though she does not suffer from the same impediment as her father.  You might say it became something of a royal trademark over the years, a sign of self-assured strength rather than weakness.  After all, it was that voice that got Britain through World War II.

The film was nominated for seven Golden Globes, including Best Picture.  Last night, Colin Firth was awarded the Best Actor title, a well-deserved honor for the thoughtfully moving performance he gave. If you're interested in learning more about the real-life figures in this drama, check out the movie tie-in book, The King's Speech: How One Man Saved the British Monarchy, a biography of Logue co-written by his grandson and based on Logue's case notes from his meetings with Bertie.  Several years ago, PBS also did a bio-pic about George VI and Queen Elizabeth called Bertie and Elizabeth, which is worth a watch.  The 1936 abdication of Edward VIII, which brought George VI to the throne, has been the subject of numerous books and films; the best of these, I think, is a 1978 mini-series, Edward and Mrs Simpson, though there have been several more recent dramatizations of the story.
Posted by Rebecca at 3:40 PM

I saw it yesterday and loved it. Posted a review up on my Literary Scribbles blog.

I can't wait to buy the DVD once it's released. It'll be a great piece of history to add to our school studies! Great review!
Laurie

Thank you for the review! I love history so I am looking forard to watching this film. I was wondering...is there anything objectionable in it?

Jan - what did you think of the movie?
Renate - great review and coverage of the film on your blog! We were really pleased to see Colin Firth win as well - definitely time he was "officially" recognized for the fine actor that he is! Keep your fingers crossed he wins the Oscar, too!
Alyssa - the R rating (which I think was unfortunate because I'm sure it's caused a lot of people to shy away from seeing the movie) was basically just because of a couple scenes with some strong language, which is arguably part of the plot (you'll understand when you see it in context). Other than that, there isn't anything questionable in it.