"The Art of Beauty:" A CW Podcast

This week's Colonial Williamsburg podcast discusses the receipts and uses of cosmetics in the 18th century.  I have never done any research into 18th century cosmetics, so I found this to be very interesting and wanted to share it here with you all.  You can listen to the podcast or read the transcript here. 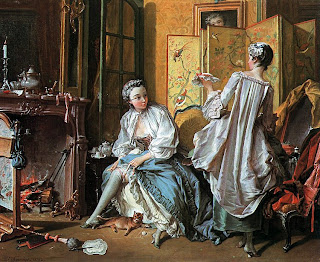 Francois Boucher, La Toilette, 1742.
In this podcast, Meg Brown shares some of her research about cosmetics as well as stories of her experiments in recreating some of these receipts.  She begins by describing the ideal 18th century "beautiful" woman: pale skin (no freckles or spots) and dark hair and eyebrows.  To achieve this look, they used powders and pastes and other receipts, some of which were highly toxic.  Ceruse, which was used to make the skin very pale (the white stuff popular in the Elizabethan era), was a mixture that included white lead.  By the 1770s, doctors were beginning to discourage its use due to symptoms in both those who used the cosmetic and those who were making it.  One of the most interesting things discussed was about hair dye.  Ms. Brown described a receipt (that she has experimented with) which called for black walnut and white vinegar.  Sounds like a receipt for ink!  In addition to applied cosmetics and perfumes, they also had face washes, some of which included strawberries and gin or strawberries and white wine (mmm!).

Ms. Brown recommended "The Toilet of Flora" as an excellent resource for anyone interested in learning more.  This is an 18th century publication and can be found on Google Books (there are a few editions available there).  It looks like there are also a few recently republished print editions available as well.

If you're interested in experimenting with some 18th century cosmetics yourself (the non-toxic kind, of course!), I've read a lot of good things about Ageless Artiface, though I have yet to try them myself.  If anyone has, I'd love to hear about your experience!
Posted by Ashley at 1:20 PM

Hello ladies,
This is so amazing---a few days ago I ordered several products from Ageless Artifice. (Katie is delightful, by the way). My husband and I present a variety of historical programs, and especially our most popular 'DRESSING A COLONIAL LADY'. I wanted to have something new for our next presentation in May, at an historical museum in Maine, and thought it would be nice to feature some 18thc grooming aids/cosmetics. We intend to display the products, and I will use some as well, for the program. Katie has graciously agreed to furnish us with a number of her cards that we can place on the display. I am currently doing more research into the use of cosmetics then, and feel that our audiences will enjoy seeing some 'beauty products' of the time~
Thank you once again for your timely and informative post.
Mary
http://anhistoricallady.blogspot.com

PS
Several months ago, I visited a site with a forum on the best hair dyes to cover grey hair. Several permanent haircolors were mentioned, but one lady posted about a "natural" way she had read about that involved the black walnut and vinegar you mentioned! This was supposedly on some 'natural remedies' type of site. She said she had immediately tried it, and that it did NOT cover her grey, OR change her hair color in any way!
(---At least she tried it!)
I confess, I was momentarily thinking of trying it myself, since I only have grey right at the very front of my head, and when she said it didn't do anything, I sighed...guess I'll just live with mine!
Mary
http://anhistoricallady.blogspot.com

Mary, what a delightful coincidence! Your program sounds lovely. You'll have to let us know how your audience reacts to the beauty trends and secrets you discuss, and to the Ageless Artiface products. I bet it will be a lot of fun!

Hi Rebecca,
We just got our order from Ageless Artifice today, and I ordered the book you mentioned from Amazon as well. The items look so charming, and we look forward to trying them. The liquid rouge I may just 'look at' and display on my 'powder room' shelf---It says that it stains, and it looks like it would! If I got that on a gown I would be devastated! I will have to try it out when dressed in my usual paint-stained sweats! I will post after our presentation and let you know how it went~
Mary

PS The lady who tried that 'hair dye' concoction did so for several months, with no change---too bad! I am sure it would be healthier for hair than chemical dyes!

Good day, ladies~
I wanted to give you an update on a few of the items we ordered from 'Ageless Artifice'~ I confess I tried the liquid rouge with trepidation, and was thrilled beyond any expectations! It is so natural, no one would ever know the subtle 'blush' wasn't you! (I love this rouge better than any blush I have ever tried, including the very natural cream blush I normally wear.) The red lip rouge is equally as wonderful, with very subtle color that enhances but in no way looks like 'red lips' or lipstick! In short, I LOVE my products and plan to use them myself. I have not tried the tooth powder, but the lavender water we got smells delicious with just a dab behind an ear. I cannot recommend Ageless Artifice highly enough---the products are delightful, and the prices budget friendly.
Mary
http://anhistoricallady.blogspot.com