From 21-22 October 2011, Winterthur will hold a conference, "With Cunning Needle: Four Centuries of Needlework."  The two days of lectures, workshops, and half-day seminar sessions will focus on the techniques, materials, heritage, and artistry of needleworkers and their creations from the seventeenth century through the present day.  The conference is scheduled as a complement to Winterthur's current exhibit of the same name, which explores the history of embroidery and other needlework arts by showcasing extant pieces that highlight not only the tremendous skill involved in producing these heirloom items, but also the lives of the individuals who invested themselves in these creations, and the lives of those fortunate enough to own and wear such treasured objects of art.  The exhibition premiered on 3 September and will remain open until 8 January 2012. 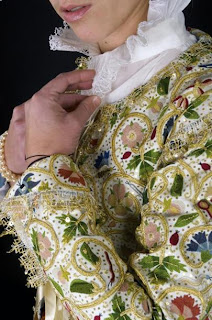 The Plimoth Jacket.
Photo linked from the Winterthur Museum.
The "Plimoth Jacket," currently on loan to Winterthur from Plimoth Plantation, forms the inspiration and heart of the new exhibit and the conference.  For those of you who have not yet heard about the project, the Plimoth Jacket is a conglomerative reproduction of two 1620s jackets held in the collection of the V&A; one jacket (the "Margaret Laton" jacket, V&A #T.228-1994) served as the pattern base, while the other (V&A #1359-1900) provided the embroidery design that was reproduced in exact detail for the project.  This jaw-dropping piece was brought to life by more than 300 hard-working hands that used only early-seventeenth-century tools, materials, and techniques to recreate the sequins, lace, threads, and fabric that make up this jacket.  More than 3,700 hours were invested in this exploration of seventeenth-century needlework culture and practice.  The product is a triumph of research, art, meticulous skill, and a passionate devotion to the skills of the artisans of the past.  Plimoth Plantation's The Embroiderer's Story blog and Tricia Wilson's Thistle Threads blog provide detailed records of the creation of the jacket.  Winterthur has also put together a fabulous presentation full of great images and lots of additional information about the production process from inspiration to pattern to progress to product; be sure not to miss it!

If you are interested in attending the October conference, the conference brochure and registration form can be found in .pdf form here.  Further information on Winterthur's extensive permanent Textiles and Needlework Collection (including virtual catalogues and past exhibits) can be found here.

For more on the patterning and construction of garments like the Plimoth Jacket, take a look at Janet Arnold's Patterns of Fashion 4 (which Tricia Wilson discusses in her blog account of the jacket project here and here) and Jenny Tiramani's new book, Seventeenth-Century Women's Dress Patterns (which we heard her speak about at the March CW conference!).
Posted by Rebecca at 1:35 PM

How lovely! We weren't far from there when we were at Brandywine last week. In fact we drove into Deleware on the back roads without realizing it. I wish I could go to the conference. It's not so far...maybe we can visit the exhibit.
Laurie

That is one of the most beautiful pictures of Elizabethan embroidery I have ever seen. It made my heart skip a beat. Its wonderful they put such lovely things even as reproductions on display. I want to see this exhibit, thanks so much for posting.