Because we've discussed Kate Middleton's wedding gown at such length and admired and sighed over its details in such depth, I thought it would be fun to share something I just so happened to stumble across yesterday.  Butterick has designed a pattern (#B5731) so that you, too, can make and wear a copy of the Duchess of Cambridge's Sarah Burton/Alexander McQueen wedding gown!  From the photos and line drawings on the pattern envelope, it seems to be a fairly good replica, though they didn't quite capture the clever and oh-so-elegant way the skirts of the original were draped (which was one of my favorite parts of the gown).  And, of course, any recreation won't be able to boast the world-renowned handiwork of the Royal School of Needlework, and few reproductions can incorporate genuine Irish Carrickmacross lace, and I don't think that Butterick notes any of the placement and patterning of the applique lace designs that added such an amazing texture and dimension to the skirts of the original.  But then again, the rest of us wouldn't be marrying a future king in our reproduction gown, so these are tiny details indeed!  So in general, I think they did quite a nice job with the pattern; visit the Edelweiss Patterns blog for a more detailed comparison of the pattern and the original.  If anyone attempts a reproduction using this pattern, we'd love to see your final product and how it turns out! 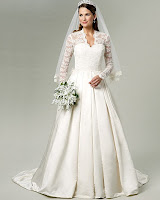 Kate Middleton's wedding gown (left), with its Butterick (B5731) counterpart.
To purchase the Butterick pattern, click here.
Left photo linked from wallang; Butterick photo (right) linked from the Butterick website.
And for a bit of added fun, Butterick has also released a pattern (#B5710) that closely replicates the style of Phillipa Middleton's bridesmaid's gown and another that copies the adorable dresses of the young flower girls (#BP248)!  Now if we can just convince them to pattern some of the other historic royal wedding gowns...  :-)
Posted by Rebecca at 1:03 PM