The Pattern: Drafted by me, by trial and error, with multiple mock-ups until I got the shape of brim and volume of crown that I wanted. The final mock-up of my pattern!
Inspirations: Although there are scores upon scores of prints, engravings, paintings, and textual descriptions representing a wide variety of bonnet styles from throughout the 18th century, only one extant example of an actual bonnet can be confidently dated to that period (as far as I'm aware).  This one, owned by Colonial Williamsburg (acc. no. 1993-335), has served as my primary point of reference for my project. 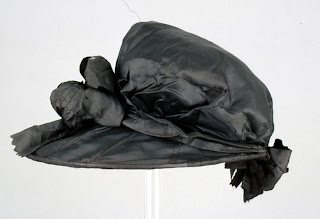 The only extant bonnet that can be confidently dated to the 18th century.
It is owned by CW, acc. no. 1993-335.
Photo linked from Colonial Williamsburg's E-Museum.
It is made of black ribbed silk and features a doubled brim supported by baleen.  CW's description further says its "puffy, mushroom-shaped crown is pleated to the boned brim, adjusted with a ribbon drawstring at center back," that is it unlined, and that the ruffled trim and the bow are made of fabric and tacked in place at the point where the crown meets the brim.

My other primary reference for this project is George Stubbs's well-known painting of The Haymakers, dated 1785, which features a bonnet similar in style, though with a slightly larger crown and wider brim, and the latter appears to be lined in white (see the detail below).  Although this is clearly a working woman (however idealized, in her white accessories!), her bonnet could still be made of silk, but wool is another close possibility. 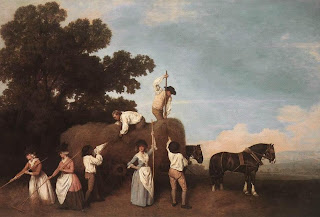 George Stubbs, The Haymakers (1785).
Image linked from the Tate Gallery. 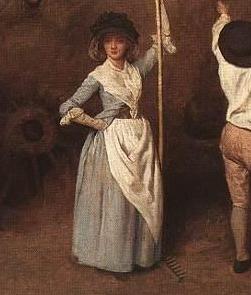 The Haymakers, detail of the bonnet.  Note the white lining of the brim.
If you're interested in seeing more images of a variety of bonnet styles, be sure to check out Nicole's three fantastic posts on bonnets (one, two, three) on her blog, Diary of a Mantua Maker.  Karen's 18th Century Notebook page on bonnets also offers a list of images and further resources.

Construction Details: I have not examined the CW bonnet in person, and I freely admit to knowing next to nothing about millinery techniques in general (though I'd love to learn!), so my construction method was based on the details provided on the CW e-museum listing and on 18th century cap construction techniques.  Whether I've done it "the" period way, I don't know, but considering there's only one extant example to study, I figure it's anyone's best guess how these things were put together!  If any of you have done bonnets like this, I'd love to compare notes and hear how your assembly process differs from mine! Side view of the bonnet.
First, I made up my brim out of a couple layers of cotton buckram and sewed a light-weight wire along the edge to help the brim maintain its shape.  The CW original uses baleen to achieve its shape, but the baleen substitute I used in my stays (ash splints) was just too heavy to use in the brim, so I adapted the buckram and wire method instead, which worked quite well.
I then covered the brim, top and underside, with silk and finished it along the inside edge.  The crown is unlined, as is the CW example, so I sewed a drawstring channel for the ribbon adjustment at the back and then finished the other edges of the crown before I whipped it onto the brim, just as I would do for a cap. Front view, with the self-fabric decoration copied from the original.
Finally, I created self-fabric poofs and a big self-fabric bow at the front, based on the CW original, and voila!  A bonnet!﻿
The Fabric: A beautiful Italian black silk taffeta that is the ideal weight for something like this - stiff enough to hold its shape well in the crown and brim, and well worth the "designer" price.  I found it on a mini shopping spree to the incomparable Banksville Fabrics over the summer.  Just wait till you see what Ashley walked out with...but that's something for an entirely separate post!  :-) Finishing the Look: Although I started this bonnet before UTR and fully intended to have it done by then, I got tangled up in other projects and ended up putting it aside for months.  I picked it up again a few weeks ago to finish it and finally gave it its first airing this past weekend at our local event.  For this event, I gave it a "nicer" working-class look based off the Stubbs painting above, wearing it over a linen cap and paired with white linen accessories and a linen gown (which was supposed to be done in June for summer camp-wear, but didn't get finished until mid-July.  Hmm...do I sense a pattern here?!  More on that gown coming in the next Threaded Bliss post, so stay tuned!). Pray forgive the weird way the shadows fall here - you can't really tell
where the bonnet brim ends and my face begins, but you get the general idea!
Photo taken during "1776: South Britain Comes Alive," 8 October 2011.
Posted by Rebecca at 12:56 PM

i like the last photo--this is a really nice look. great job on the bonnet :)

Aww, thank you ladies! :-) This was a lot of fun to make and I'm already planning my next one, in a slightly different shape and with different colored fabric. Most women love shoes, but I'm all about the hats! :-)

Oh, Joy, somebody's actually GOT an example of an 18th Century bonnet. I did a paper on them in 1987, and my professor didn't believe that they existed. She kept insisting that whatever was meant by "bonnet" in runaway descriptions must have been something else!

Really?!! The CW example is the only extant one that I'm aware of, so I understand your professor being skeptical on that account, but how did he/she explain away the plethora of images - prints and paintings - that depict quite a wide variety of bonnets being worn throughout the 18th century?! There are dozens upon dozens of them, which makes "the bonnet" pretty hard to deny! What did you discuss in your paper? I'd be very interested in hearing more about it.

Have you seen Nicole's multiple fascinating posts about different types of 18th century bonnet styles on her blog, Diary of a Mantua Maker? A very fascinating subject indeed, and it's really neat to know you were on the "cutting edge" of researching it no so long ago! Thanks for sharing that, Pat!

I'll see if I can dig it up. My favorite picture of one is Walton's "The Silver Age" with the little market girl.

I was a Rev-War re-enactor for a while. I also worked on the Revolution in Fashion exhibit when it was at FIT. I'm JUST getting back into 18th century clothing costuming dolls.

Yes, I like that Walton painting a lot, too! There's another painting of a young girl in a blue bonnet that I love. Of course I can't find it now that I'm specifically looking for it, but when I do, I'll post it here. The bonnet's color is gorgeous, as I recall. In your research, did you discover anything about trends in bonnet colors?

Oh how exciting that you worked on the Revolution in Fashion exhibit! I wish I had been able to see that in person - the photos alone are breathtaking. I wish FIT or the Met would put together another 18th century exhibit soon. It's been too long since we've had a good on in the NYC area!