This holiday weekend, the National Park Service waived entrance fees to each of their 397 historic sites and park properties.  I decided this was the perfect opportunity to take in some history closer to home, so despite the cold (it was all of 9* when I left yesterday morning, with a wind chill of  -5*), I headed towards Hyde Park, NY to explore its three very unique National Historic Sites that sit on the banks of the beautiful Hudson River.  Here are some interesting tidbits from the first stop. 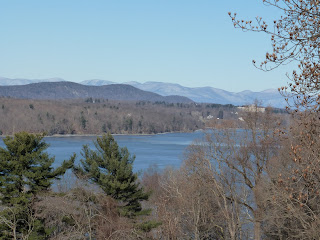 A winter view across the Hudson River Valley, from the Vanderbilt riverfront
property.  I'd love to go back in a warmer season to see it all alive, green, and leafy.

Vanderbilt Mansion (originally called "Hyde Park" before the town itself assumed that name) was the home of Frederick and Louise Vanderbilt, who acquired the stunning riverfront property in 1895.  Although only a seasonal home (summers and winters were spent either in NYC, Newport, or abroad), the couple had a smaller 16-room "cottage" Pavilion built to accommodate them during the construction of their Charles Follin McKim mansion, which was finally completed in 1898.  Once the main house was finished, that original Pavilion became the bachelor's quarters during house parties; only married couples and single ladies were permitted to sleep within the mansion itself.  Back then, to be considered genuinely married in the eyes of strictly regulated turn-of-the-century society, a union had to be more than a month old.  So in 1905, when the young Franklin D. Roosevelt and his new bride Eleanor visited the Vanderbilts during their honeymoon only a couple of weeks after their wedding, the future president was obliged to stay in the bachelor's Pavilion, while his new wife stayed in the main house.  How's that for a honeymoon?! 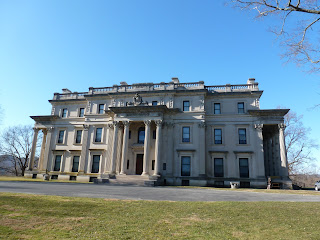 An eastern view of the house, with the river behind.

The interior of the house is stunning, a wealth of Beaux Arts Gilded Age detail, antique European furniture, and (of course) lots and lots of marble. I spent the entire time feeling tortured by not being able to take pictures, every room was so incredible. As "new money" (Frederick was only the grandson of the great, self-made Cornelius Vanderbilt), the couple felt the need visually to establish and assert their superior social status as part of the richest family dynasty in the country (apparently, his father amassed a fortune that exceeded the coffers of the federal government). The house is thus rich in "royal" symbolism, with a de Medici crest on display in the massive and imposing entry foyer and a crown literally crowning the bed amongst the dark, European opulence of Frederick's room. Louise's bedroom is said to have been designed with specific reference to Marie Antoinette's own at Versailles, its gilded French rococo walls echoing an earlier era of similar decadence. And if that wasn't enough to convince the world that the Vanderbilt family had officially "arrived," one of the favorite past times of the Hyde Park locals was the gather on the mansion's lawns at dusk to marvel at the sight of the house being illuminated at night. It was the first home in the area to have electricity, the Vanderbilts beating their Roosevelt neighbors by almost twenty years. 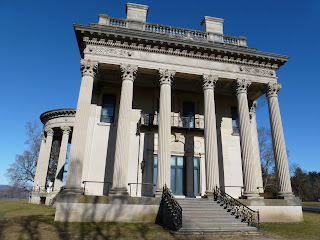 One of the most fascinating stories surrounding this monument to a bygone era is the tale of how it came to be part of the National Park Service.  When Frederick Vanderbilt died in 1938, the house and all of the property went to his wife's niece.  Uninterested in maintaining the property and unable to sell it (despite rock-bottom pricing - at one point she reportedly was willing to take as little as $250,000 for it) because of the country's weak financial situation, the niece was convinced - by none other than FDR himself - to donate 211 acres, the house, and nearly all of its original contents, to the federal government to be preserved as a memorial of both a family and a unique moment in a uniquely American time.  This means that the house is almost literally a time machine, with virtually nothing having been changed since it was built and first decorated over a century ago. 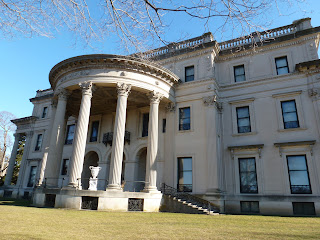 The western facade which faces the river.  This is the view boaters traveling the
Hudson would see, mounted regally atop the River's high banks.

The tour of the house is fantastic because it gives access to all but the third floor.  The entirety of the first and second floors are open to the public, and we were even taken into the basement (down the windy staff stairs!) to view the servants' hall, kitchens, and living quarters of the male house staff.  Rarely do historic house tours bother to restore, much less show off, original staff areas, so this was an extra special surprise and a very Upstairs, Downstairs/Downton Abbey moment!

There are numerous other Vanderbilt homes across the country that are also open to public tours, though this is the only one owned and operated by the NPS.  Newport, RI, which we've visited numerous times and highly recommend, has two Vanderbilt mansions from the same Gilded Age period, run by the Newport Preservation Society.  The Breakers, a National Historic Landmark and arguably the most famous of the Newport Mansions, was built by Frederick's eldest brother, Cornelius II.  Just down the road is Marble House, recently made famous by its numerous film appearances, but originally the home of William Vanderbilt, another brother of Frederick and Cornelius II.

If you've missed your opportunity to take advantage of this weekend's special fee waivers, the NPS still has fourteen more fee-free days this year!  Make plans and get out to enjoy some history, and let them know how valuable we think our historic sites are!

Additional photos can be found on this visit's flickr set.

Up next: stops two and three of my Hyde Park adventure!
Posted by Rebecca at 6:16 PM

Wow, thanks for the history! What a wonderful visit. I am home and extremely jealous of your day's adventure. Thanks for sharing!

Great post! I must also plug the Biltmore House in Asheville NC. It's amazing, and if you do visit, take a walk around the downtown too. A number of the artists and craftsmen that Vanderbilt brought to the area to work on the house stuck around and contributed to the local architecture, so there are some fantastic buildings.

Thanks for the recommendation, Stephanie! I would *love* to visit Asheville - it's on my "must-see-one-day" list, along with Charleston and Savannah. There's so much down there, and I'm ashamed to admit that the only bits of the country I've seen south of VA are Florida and New Orleans! One day soon I want to remedy that!