The second and third stops on my Hyde Park travels this past weekend were to two sites related to the first - and not quite as tangentially as you might think!  As I mentioned in the previous post, the Roosevelts were another prominent local family, and the closeness of their connections to the Vanderbilts is evident by the fact that Mr. and Mrs. Franklin Delano Roosevelt opted to spend part of their honeymoon at Frederick Vanderbilt's mansion.  FDR is also responsible for the preservation of the Vanderbilt Hyde Park estate, as it was he who convinced Louise Vanderbilt's niece to donate the house and its contents to the federal government as a National Historic Site in 1940.

It seemed only natural, then, to make my next visit a stop at the FDR home, Presidential Library, and museum, just a couple of miles downriver from the Vanderbilt mansion.  Springwood was purchased by FDR's father, James, in 1867, and it was there that the future president was born in 1882.  When James died in 1900, he left the home and all the surrounding property not to one of his children (he had an older son by a first marriage) as one would expect, but to his second wife.  Sara Delano Roosevelt, Franklin's mother, apparently ruled the home with something of an iron fist and yielded little to her son, despite his increasingly prestigious political career.  When FDR married Eleanor, the couple moved into Springwood with Sara.  Their rapidly growing family - the couple had six children (though one died in infancy) - demanded a home larger than the small Italianate villa that was Franklin's childhood home, but Sara sought to dictate any changes to the house on her own terms.  Franklin favored the Dutch colonial style popular in the area and reflexive of its long, rich history; his mother desired a renovation that would recreate the house in a more stately, early-nineteenth-century English style.  Neither side would budge, so the result is the structure as it appears now, a charming compromise that combines Sara's vision at center, with FDR's fieldstone Dutch wings at the sides. 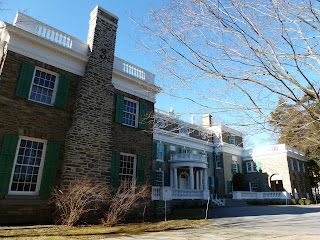 The front of Springwood, the home of FDR.  When the house was rebuilt
to accommodate FDR's growing family, the middle part was designed according
to his mother's tastes, while the Dutch colonial style admired by FDR was
integrated in the side wings at left and right.

The Park Ranger who led our tour was a wealth of information and anecdotes, and it was her insight that made the tour such a memorable experience.  She made sure to point out the presence of the 36th (or was it the 37th?  I can't remember!) television ever made, which sits in Sara's "snuggery" room.  FDR gifted it to his mother with the firm advice that she was not to invest in this new invention, as it showed little promise for the future.  FDR was also an avid collector of political cartoons, some of his favorites being those printed during the Revolutionary War that depict the struggles between American and British authorities.  When King George VI and Queen Elizabeth visited the Roosevelts at Springwood before WWII, Eleanor suggested it might be best to remove the latter pieces from their prominent places on the walls of the front hall.  Roosevelt declined, curious to see how the royals would react.  As the story goes, upon arrival, the King immediately spied Roosevelt's Rev War cartoon collection and promptly went to take a look.  After reading every single one, the rest of the company standing by in silence, he thoughtfully turned to FDR and said, "It appears, sir, that you have some in your collection that I do not!"  Amongst their other notable accomplishments, the Roosevelts can also be credited with introducing the King and Queen to the hot dog, which was a favorite of FDR.  The Queen Mother, having never seen such a thing, had to ask FDR to explain the proper way to consume it! 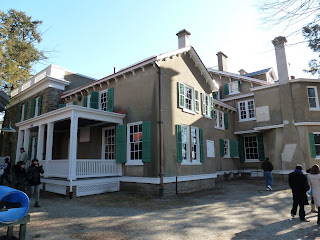 One side of the house, as viewed from the back.  I love all of the different angles. 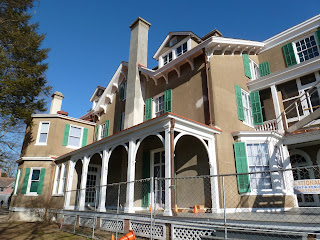 On the same property is also FDR's Presidential Library and Museum, which I unfortunately didn't have the time to see on this visit but will most certainly return to explore in the near future.  This was the very first presidential library, and the only one ever to be built by a president while he was still in office.  FDR dedicated part of the Springwood estate to the construction of the library, which he publicly opened himself in 1941 and promptly donated to the federal government.  Some of its many treasures include FDR's White House Oval Office desk and the original copy of the message he delivered to Congress on December 7, 1941, the corrections to which were made in his own hand (you can view a .pdf image of it online!). 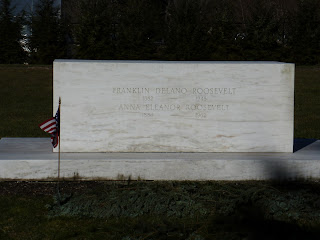 The final resting place of Franklin D. and Eleanor Roosevelt (did you know
her first name was Anna?), in the rose garden at Springwood.

My final stop on my Hyde Park venture was to Val-Kill, to pay homage to one of the our country's most influential and beloved First Ladies, Eleanor Roosevelt.  FDR was (and forevermore will be) the only president ever elected to four terms in office, and his wife is the only first lady ever to be honored by having one of her private homes designed a National Historic Site under the protection of the NPS.  Val-Kill ("val" being short for "valley" and "kill" being old Dutch for a river) was created in 1924-5 as a retreat for the Roosevelts and two close family friends who loved the quiet beauty of the setting and valued it as a escape from FDR's political work and associates.  A Dutch colonial cottage was built on the property, which was supplemented in 1926 by a larger building that became the home of "Val-Kill Industries."  This was an experimental project begun by Eleanor and three friends; they wanted to teach local farmers the handicraft and manufacturing skills that would enable them to support themselves when their incomes from farming were insufficient. 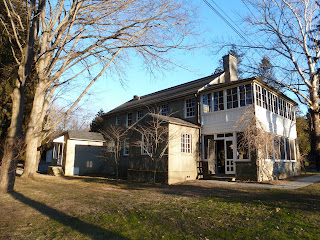 When the small factory was obliged to close because of the Great Depression in 1936, Eleanor transformed the larger building into a home for herself and her secretary, a retreat where she could escape from the daily pressures of being "the First Lady of the World."  There, she lived simply, proud to use and display the furniture and other household items created by the former Val-Kill Industries.  When FDR died in 1945, Val-Kill became her permanent residence and remained so until her death in 1962.  Through its unpretentious rooms passed some of the world's greatest figures, from John F. Kennedy to Khrushchev to Marshal Tito, each of whom came to consult with the former first lady and seek her advice and wisdom.

I hope you've enjoyed this brief little whirlwind history tour of Hyde Park, NY!  I've touched on only the tiniest bit of the incredibly deep history of this area, so I'm very much looking forward to returning at some point to discover more.  Don't forget to mark the next National Parks entrance-free days on your calendar!

Additional photos can be found on this visit's flickr set.
Posted by Rebecca at 11:37 AM

Oh I am loving all this! Wish I could have joined you! Thank you so much for sharing. The pictures and commentary are superb!
Laurie

Laurie, this is all quite close to West Point - just on the other side of the river. Next time you guys come up this way, it's definitely worth putting on the agenda! The NPS guides were all fantastic and so knowledgeable - even if you can't manage to come on a fee-waiver day, it's worth the price for everything you learn and get to see.

The history provides a complete account of life in Hyde Park.