The Tale of One Extraordinary Edwardian: Rosa Lewis

With all of the interest in all things Edwardian currently being stirred up by Downton Abbey, I thought it would be fun to share the story of one of my favorite lesser-known Edwardian figures. Rosa Lewis was London's famed "Queen of Cooks" around the turn of the century and a significant figure in London society until her death in 1952. Though she began her working life at the age of 12 as a lowly general servant and scullery maid, her tenacity, quick wits, and marked talent for all things culinary earned her a place in the kitchens of the Comte de Paris (the exiled heir to the French monarchy), where she swiftly earned her place as Head Kitchen Maid. Rosa Lewis in an undated photo, presumably from the end of the Edwardian period.
Photo linked from Wikipedia.
While with the Comte's household, she was tutored in the art of French and Continental cuisine, which was becoming increasingly fashionable in the 1880s. The Duc D'Orleans took her into his household in 1887 as Head Cook; he soon began to hire her out to cook in the houses of society's leading families, and it was while working at one of these private engagements (for Lady Randolph Churchill, mother of Winston Churchill) that Rosa first encountered Edward VII, then still Prince of Wales. He was so impressed by her culinary abilities and by her eccentric personality that the two became lifelong personal friends. The King is known to have had many mistresses, and Rosa was presumably one of them, though he never publicly acknowledged that they shared anything more than a close friendship.

As a known favorite - both culinary and personal - of the Prince of Wales, and later King Edward VII, Rosa was highly sought-after by society hostesses looking to impress their guests with the most fashionable and sumptuous cuisine; she was dubbed the "Queen of Cooks" and was widely acknowledged to be the best cook in London. In 1902, Rosa purchased the Cavendish Hotel and transformed it into one of the most fashionable private hotels in the country. The Cavendish catered to the elite of society, serving as a home-away-from-home where the wealthy of British and American society could enjoy themselves and be entertained by the infamous Cockney-accented antics of Mrs Lewis. Kaiser Wilhelm II (whose portrait she allegedly hung in the men's lavatory at the outbreak of WWI), Evelyn Waugh, Winston Churchill, and the future King Edward VIII were among many of her famous guests. 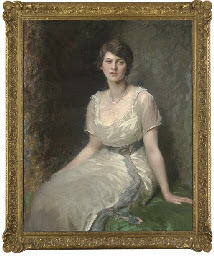 Rosa Lewis in 1914, painted by Daniel Albert Wehrschmidt.
Photo linked from Christie's.
Though the fashion for the elaborate and costly entertainments of the Edwardian period declined rapidly during WWI and the hotel came very close to financial ruin, Rosa kept its doors open, catering to returning soldiers who were never permitted to pay. She toured America in the late 1920s, giving some rare interviews and teaching a new generation of eager culinary students some of her royal secrets.  During WWII, the front of the hotel was destroyed by a bomb, but Rosa and the hotel emerged still victorious and determined to go on. Those who knew her in her later years were still impressed by her exuberant and oversized personality and her desperate desire to hold on to all that had been great about the late-Victorian and Edwardian period that had been her heyday; until her death in 1952, she persisted in wearing the fashions of the turn of the century.

The extraordinary life of Rosa Lewis was (thinly) fictionalized into a BBC series, The Duchess of Duke Street, which originally aired in Britain in 1976-77. Gemma Jones portrayed the eponymous "Duchess" and "Queen of Cooks," renamed Louisa Trotter in the show. Jones's performance is one of the finest pieces of acting I've ever seen; having read the little that has been written about Rosa by those who knew her, it's easy to imagine that Jones quite closely and brilliantly captures all that was fascinating and remarkable about Rosa Lewis.

Rosa's Cavendish Hotel was demolished twelve years after her death, but it was rebuilt by new owners on the same site. Today, it remains one of London's exclusive hotels and honors the history of its most famous - and infamous - personality with a recently unveiled memorial plaque.

Rosa's commemorative plaque outside of the present day Cavendish Hotel.
Photo linked from wikipedia.
Further Reading:
If you're interested in learning more about the life and times of Rosa Lewis, be sure to check out these sources.
- a Rosa Lewis online biography from The Royal Forums
- The Queen of Cooks - and some Kings, by Mary Lawton, reportedly written from the dictation of Rosa Lewis herself (1925).
- Rosa Lewis: An Exceptional Edwardian, by Anthony Masters (1978).
- The Duchess of Jermyn Street, by Daphne Fielding (1976).
Unsurprisingly, the latter two were published during the run of the successful TV series, The Duchess of Duke Street.  Perhaps with all of the new interest in Edwardiana, we might see some further research in the near future!
- The Duchess of Duke Street, the fictionalized TV serial about Rosa Lewis, with Gemma Jones in the leading role.
Posted by Rebecca at 12:48 PM

The BBC series "The Duchess of Duke Street" is a highly exaggerated account of Rosa's life that did not do justice to an awesome character. Mainly based on various books written about Rosa that were casually researched and contain errors of fact plus unsubstantiated rumour and were in the main a history for whom she had worked with little about Rosa herself. The video series was entertaining but bore little resemblance to the real life warm and careing person that she was. Anthony Masters wrote the best of the books on Rosa while the chapter in Anthony Heckstall-Smith's book brings this extraordinary character to life.

Ms. Lewis was a phenomenon... a woman entrepreneur far ahead of her times, who freelanced and worked for herself when that was a very rare path. It's unfortunate that her quips and sass have largely vanished with other unknown facets of her history.