On Memorial Day Monday (May 27th), the INSP cable network will be premiering a four-part, four-hour independent drama series about the years leading up to the American Revolution.  Courage, New Hampshire recounts the stories of the citizens of a small, rural New England town on the eve of the War.  Beginning in 1770, it traces both the political and the very personal ways in which the colonists reacted to the events that lead to the fight for American independence.  According to the production company's website, this is only the first in a multiple-"season" series; each subsequent four-part "season" will focus on another year of the 1770s, eventually culminating in the experiences of the war years themselves.

We've both been eagerly anticipating seeing this series ever since news about its development first trickled out a couple of years ago.  We were thus delighted to hear several months ago that it had been picked up for a tv broadcast.  Original historical dramas are way too few and far between these days! 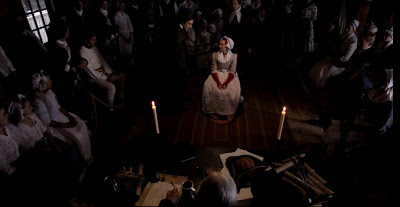 From everything we've read and the clips we've seen thus far, the production values for this series seem to be particularly high, which is fantastic to hear for a historical drama whose success depends so much on its accuracy.  The series is filmed at Riley's Farm, a living history site in CA.  Lauren at American Duchess has interviewed the costume designer, Mary Johns, and I was so impressed to hear the tremendous efforts to which she has gone to attempt to preserve accuracy in the costuming, using only natural-fiber textiles and researching styles and accessories to try to retain the historical integrity of the clothing, even in the face of the necessary artistic demands of narrative and character development.  And I also thought it was pretty cool that Mary's wardrobe team includes three people - herself and her two sisters  :-) 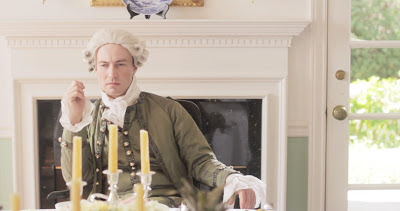 Check INSP's website for broadcast specifics and the promotional trailer.  We can't wait to see this!  If you're too anxious to wait until Memorial Day, all four episodes of the series can be viewed online here.
Posted by Rebecca at 11:53 AM

Thanks so much for this! As an extra on the set of Adams Chronicles I was amazed at the lengths the set & costume people went to get everything just right! Cant wait to see this -- and it is just perfect for my daughter who's been studying Am Hist this year,
Nancy N

Yay! I'm excited these will not just be DVDs anymore. I will add though, I was disappointed with a few scenes as some of the extras wear, what I guess, is their own costumes - and they aren't always of the quality of the main actors.

Isabella: As the costumer (who is blushing from the above review;), I was also unhappy with some of the clothing, especially on the extras.
We have been doing living history for 15 years, and I have learned a lot in that time, but we still have some garments hanging around that aren't as accurate as I would like. When we are told 'dress everyone up who is here', we sometimes have to get them in the best we have. And then....we don't make it up to the filming area in time to tell the crew that these certain people need to go in the back :( But I hope you were more pleased with episodes 3 and 4, as I think the extras improved in those episodes, and they should continue getting better in each episode we do. We are excited to get this stuff right for you, as every time I watch historical stuff I am nit picking the costumes too! ;)