The pattern: Because my fabric is dated quite specifically to 1761, I of course wanted to select a jacket style that reflected the 1760s .  At the same time, however, because my reenacting events (for the moment, anyway!) are so firmly within the Rev War period, I also wanted a style that was still current and fashionable during that later decade as well.  My thought behind this was that, as a camp-following lady, I've unpicked an old gown - perhaps one I inherited from my mother or purchased second-hand - and re-purposed the skirt panels to create a jacket in a style as functional and fashionable as was possible for me, a working class woman, to achieve.

The pattern I chose was thus the all-purpose and ever-trusty jacket from Janet Arnold, which I've used twice before for myself with my dark indigo linen jacket and my Christmas cranberry cassimere jacket, and once before with Ashley's goldenrod linen jacket.  I keep returning to it over and over because it's so comfortable and flattering and it's a breeze to put together.  Speaking of which...

Construction details: As I mentioned in the previous cranberry jacket post, the construction techniques and the process used to create this jacket are more or less identical to those used on the blue chintz jacket.  Since those have all been fully outlined in the jacket tutorial, I won't waste any space here reiterating any of the meticulous details here. The front of the jacket, sans stomacher.

For those of you who haven't read the previous posts or just want a more general explanation of the construction characteristics, here are the basics.  The jacket body is sewn together using lapped seams; although this is not the technique used on the specific jacket on which this one is based, it was used on multiple contemporaneous extant examples and is thus fully documented. One of the side-back seams, lapped and topstitched down.

The bottom half of the sleeves are set into the armscyes and these are sewn in with backstitches.  The top of the sleeves are then fitted into place with pleating while on the body to ensure a smooth and accurate fit.  Shoulder straps are topstitched over the cap of the sleeve to cover the raw edges.  Inside, the armscye is left unfinished, as was typical of the period. A view of the shoulder strap from the back, topstitched into place. The unfinished armscye in an interior shot.

One of my favorite features of this jacket is its full skirt, which drapes so nicely whether it's worn plain, as in this case, or over a bum roll (as in many of the pictures of Ashley's goldenrod jacket).  When worn without skirt supports, it has a habit of falling into quite perfect inverted pleats. You can get an idea of how full the skirt of the jacket is when it's laid out flat. Just as in the case of the cranberry jacket, I altered the original pattern again so that this jacket too closes over a triangular stomacher.  I'm not overly fond of center-front closing jackets on myself (they look lovely on Ashley, though!), but I really like the stomacher look - despite the pain in the neck it always is to pin it into place when bleary-eyed at 7am!  I'm considering adding lacing holes to this one before I wear it next.  What do you think?  Or should I leave it as it is?

The fabric: This is the "Krasse" print from Duran Textiles.  The website indicates that this design is copied from a block-printed cotton that lines a Danish christening gown dated to 1761. 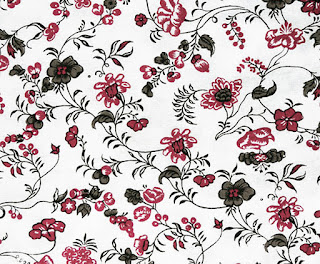 The fabric is ideal for creating a working-class garment for Rev War purposes.  The cotton is of a medium weight with a weave that is noticeably coarser than the very fine, tight cotton textiles produced by Wagenmakers or US high-quality quilter reproduction fabric companies.  Its simple tri-tone colorway - a cranberry-red, grey-brown, and black - also marks it as a less expensive print of the sort that was common to the working classes of the 1760s through the early 1780s.  In weave and colorway, it's thus quite close to a number of the samples we saw amongst the textile tokens at the Threads of Feeling exhibit recently. 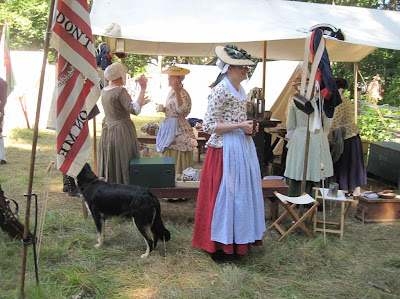 At Redcoats and Rebels 2013.
Photo taken by Frank Cabral, used with kind permission.

Finishing the look: Although I finished this jacket back in June, I wore it for the first time this past weekend at Redcoats and Rebels at OSV.  To complete the working class/campfollower look, I paired it with a red linen petticoat, a white window-pane checked neck handkerchief, and an indigo cross-barred linen apron.  A white linen cap, my new favorite silk-trimmed hat, and my trusty pinball and scissors completed the ensemble.  Everything, as always, is worn over a linen shift, fully-boned worsted stays, a set of pockets, and a linen underpetticoat. Additional photos of this project can be found in its flickr set.
Posted by Rebecca at 11:57 AM

Beautiful, and I love the fabric!