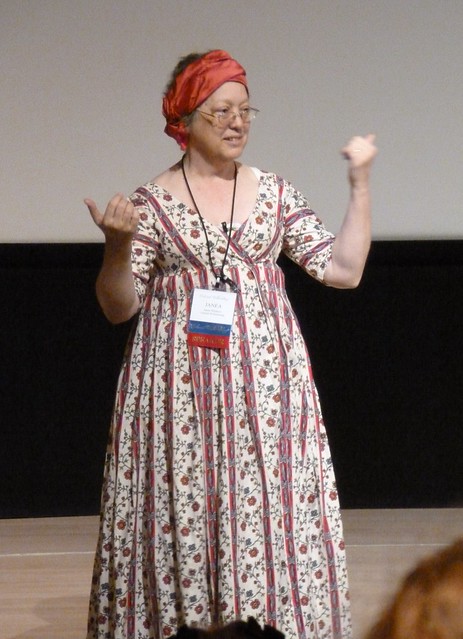 Janea opens the conference with a brief history of the
millinery and mantua making trades.

Monday morning convened with Janea Whitacre offering a comprehensive overview of the milliner’s trade and all that it encompassed in the eighteenth century. She explored in fascinating detail the various divisions of the trade (black millinery vs. white millinery, shop milliners vs. private milliners, etc.) and described how the millinery trade was often paired with other similar trades to help maximize the milliner’s offerings, clientele base, and profits. Mantua-making was one of the trades most often practiced alongside millinery, so Janea’s presentation even included demonstrations of the mantua-maker’s art of pleating an early-century mantua and of cutting a later gown bodice directly on her client. 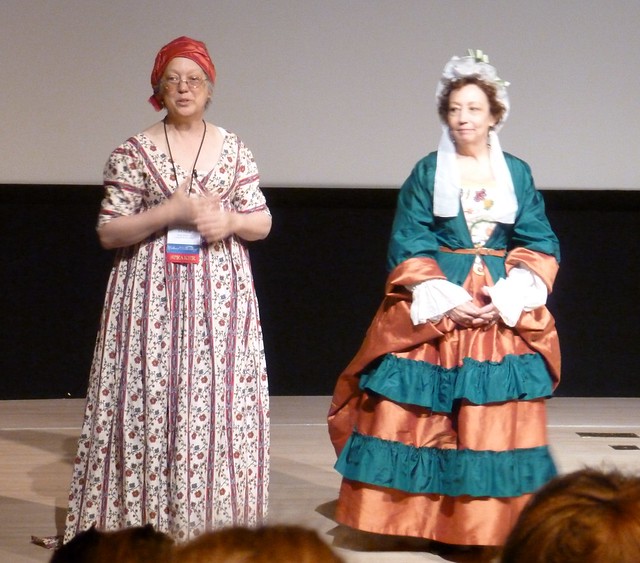 Explaining the fashion for mantuas, with Angela playing the role of model! 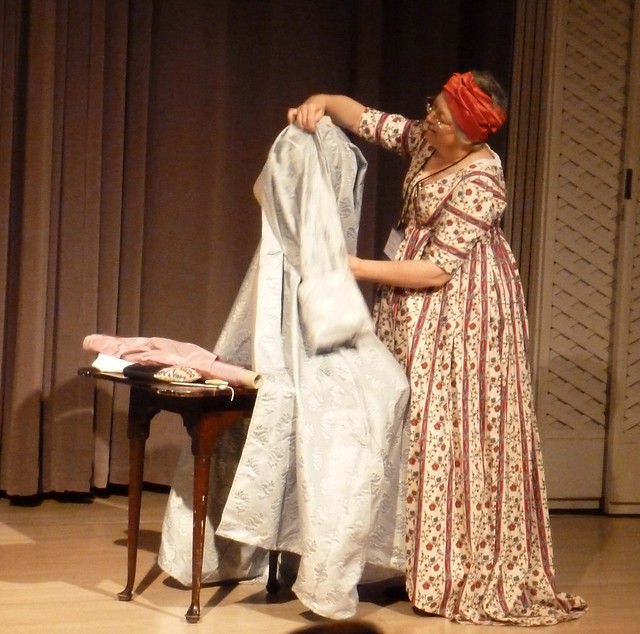 Demonstrating the pleating of the mantua. 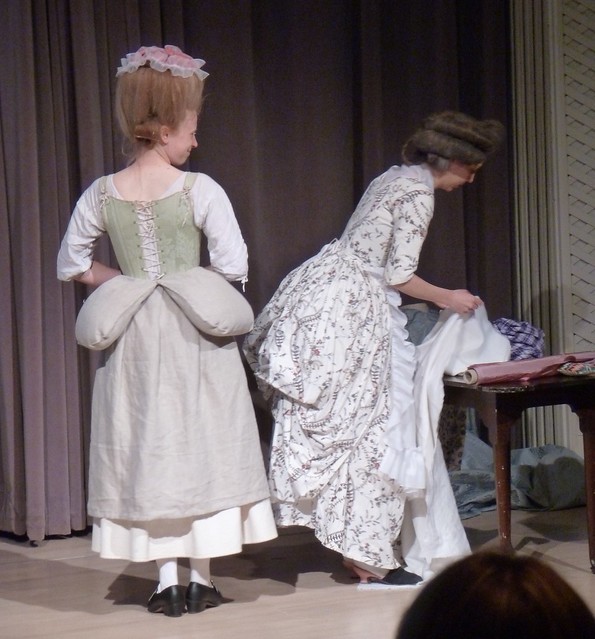 Apprentice Sarah demonstrating the cutting of a gown bodice on Miss Aislinn. 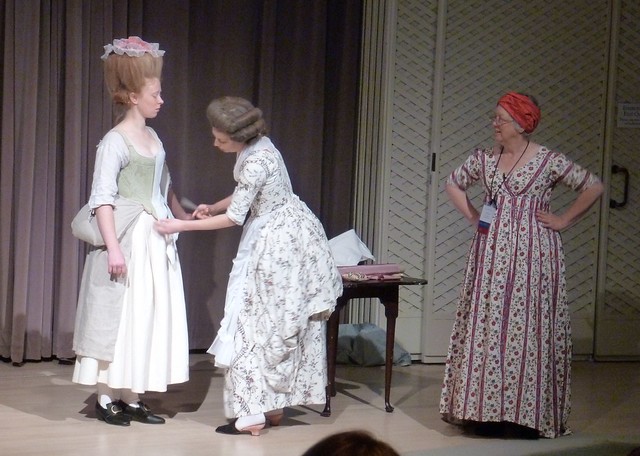 The day continued to bring one inspiring talk after another, with papers exploring a plethora of topics including everything from Monsieur Beaulard, “man milliner” to Marie Antoinette, to the milliner’s vulnerability to theft, to an examination of an extant whitework apron, to a tantalizing glimpse at the rather curious eighteenth-century fashion for black velvet masks.   Angela Burnley (of Burnley and Trowbridge) spoke at length about eighteenth-century textiles and their availability, sharing slide after slide of pictures from her extensive research into period sample books and the Foundling Hospital’s tokens archive.  Addressing not only the names and variations of common fabrics, but also their identifying weave structures and most popular colors, Angela offered a glimpse into an enthralling avenue of inquiry that can contribute so much to the work done by material culture historians, textile and costume specialists, and reenactors alike.

One of the highlights of Monday’s talks was apprentice Sarah Woodyard’s “live action” analysis of a 1782 print entitled “A Morning Ramble, or – The Milliner’s Shop.”  Reading the details of the image like a text, she highlighted elements of the eighteenth-century milliner’s identity, work, and cultural stereotypes, exposing period connotations and nuances to words and objects that have largely become lost or obsolete over time.   As she spoke, the print’s image literally took shape on stage in tableau, piece by piece and figure by figure, brought to life through reconstructions of both the physical image and its period meaning.  For more on this particular paper, see Susan's post on her Two Nerdy History Girls blog.  More about the costumes featured in the presentation can be found on the Margaret Hunter Shop's facebook page, where the ladies documented the beginnings of the "Morning Ramble" project. 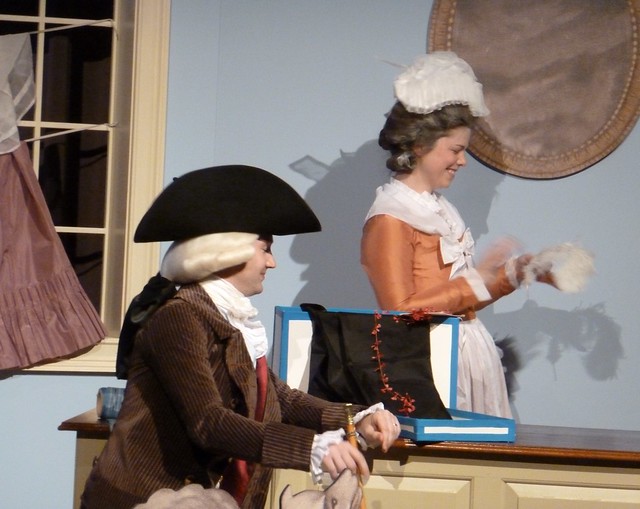 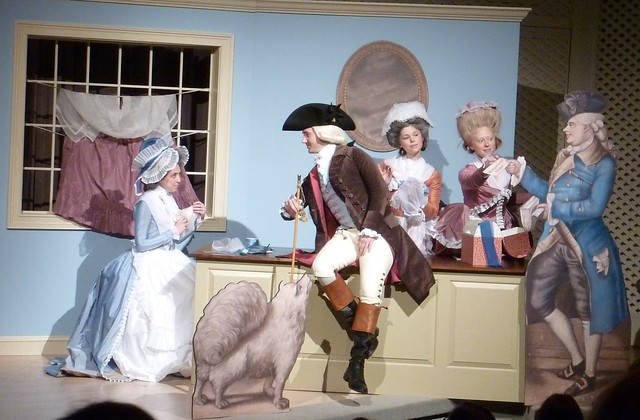 "A Morning Ramble" brought to life before our eyes. 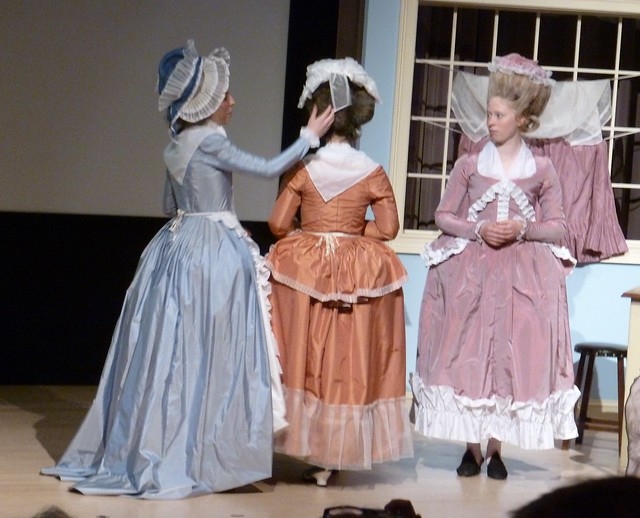 A brief discussion of the fashions featured in the print. 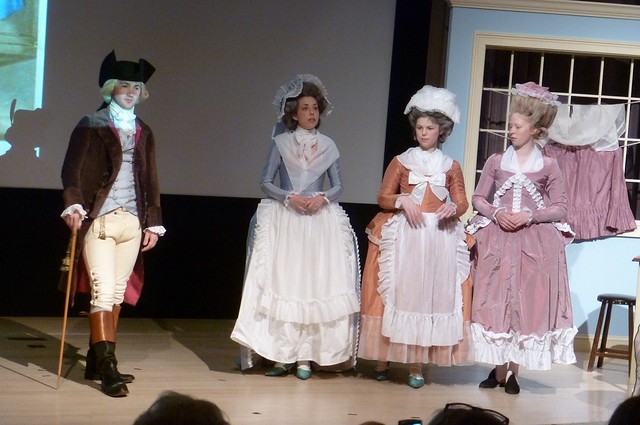 We all enjoyed a very special treat Monday evening with a staged performance of a 1780s comic burletta/operetta, appropriately entitled - of course, what else?! - "The Milliners"!  Hilariously acted with true period flair for satire, irony, and downright delightful silliness, the play took aim at both "man-milliners," perceived to be overrunning the traditionally feminine realm of millinery work, and French fashions, increasingly popular in England in the 1780s.  We laughed until our sides hurt, relishing all of the fashion-related humor and the eighteenth century habit for poking fun at everyone and everything.  The cast did a marvelous job and we were so impressed and most thoroughly entertained!

Day Three to come in the following post!  In the meantime, there are additional photos available in our conference Flickr set.
Posted by Rebecca at 3:41 PM

Sounds like it was absolutely delightful! I wish I would have known about the conference sooner, I had no idea it was going on. It seems like it would be a wonderful event!

I'm glad you invited me to go with you! Too bad it didn't work out. Perhaps someday! ;)
Laurie