Carryin' the Banner: Newsies on Strike in 1899 Having always lived within an easy commuting distance of New York City, we grew up watching and listening to musicals, both live and on film and PBS. When Newsies was first released in 1992, it became an instant favorite with us and has remained one of those go-to happy-mood-making soundtracks for both of us for twenty years. From the beginning, we were confounded that it wasn't turned into a live show, and being casual followers of theatre news, we've spent years keeping eyes and ears out for any hint that that might happen. Imagine our delight when news came out a couple of years ago that a stage version was in the works and potentially headed for Broadway. After a successful regional theatre run, Newsies the Musical finally arrived on the Great White Way a couple of months ago, and this past weekend, we finally got to see it! We've been reading nothing but positive, almost giddy reviews of the show since it opened and we were not disappointed! The star of the show (Jeremy Jordan as "Jack Kelly") is superbly cast, the music is Alan Menken (of Oscar-winning Little Mermaid and Beauty and the Beast fame) at his best, the book is a hoot and a half, and the choreography impeccably executed by a cast of truly awesome dancers. Originally slated for a brief four-month limited engagement, the show is now officially listed with an open-ended run, so if you have plans to be in NYC any time in the future, go see it! 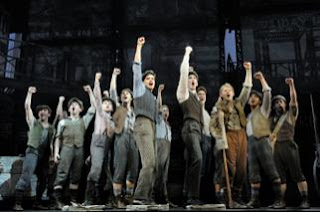 The cast of Newsies in the new Broadway production.
Photo linked from NewsiestheMusical.com.

While this might not seem a typical blog post topic for us, it does actually have some relationship to history! Newsies is based on the New York newsboys strike of 1899. For the latter half of the nineteenth century and well into the twentieth, young boys were the primary distribution apparatus for the newspapers of New York City and across the country. Home delivery was not yet introduced, so poor, often homeless boys worked as independent contractors, purchasing with their own money a bundle of papers to sell each day. Because they weren't official newspaper employees, they had no labor rights and were not compensated for any unsold papers at the end of the day; as a group, they were unorganized and their measly pay of about 30 cents a day perpetuated their ragged, dirty, and desperate existence. Throughout the 1880s and 1890s, there were periodic strikes by newsboys angling for better pay and more humane treatment, but it wasn't until 1899 that they became organized enough to effect significant change.


In 1899, the two largest New York papers, Joseph Pulitzer's The Evening World and William Randolph Hearst's The Evening Journal, refused to drop the higher prices they had introduced during the Spanish American war, when newspaper circulations were consistently good because of steady war news.  As soon as the war ended, however, circulation began to decrease, making the wartime price a hardship for the newsies, who found it increasingly difficult to make a profit at the end of each day when left with unsold "papes" on hand.  With the help of a handful of charismatic leaders, including Kid Blink, Jack Sullivan, David Simmons, and Spot Conlon (yes, they were all real!), the newsies formed a union of their own and went on strike, rallying with more than 5,000 of their number.  Press coverage from the other New York papers covered the strike news with delightful, gloating detail, obviously with thorough enjoyment as they watched the two biggest rivals struggle with circulations that dipped by more than half.  In the end, both Pulitzer and Hearst refused to budge on the price, but they did agree after two weeks to begin to buy back any unsold papers.  It was a marginal triumph for the exploited young workers, but a triumph nonetheless.


Interested in learning more?
If you'd like to learn more about the real-life newsies and the child labor conditions of turn-of-the-century New York, check out these resources:
- Children of the City: At Work and at Play, by David Nasaw (1985);
- Kids on Strike!, by Susan Campbell Bartoletti;
- The Bowery Boys post on the newsboys strike of 1899 includes a set of fantastic photos and period images of newsies and their turn-of-the-century world;
- the NYPL has a page to help trace original 1899 newspaper articles that covered the strike.


And if you'd like to see and hear more of the new Broadway musical version of Newsies, take a look at:
- the musical's official website;
- the cast of Newsies performing on "Good Morning America";
- 2012 Tony Awards clips for Newsies.  And don't forget to watch the Tonys on Sunday night, where Newsies has been nominated for 8 awards, including Best Musical, Best Actor in a Leading Role (Jeremy Jordan), and Best Original Score (Alan Menken and Jack Feldman). Newsies at the Nederlander Theatre, nominated for 8 Tonys!
2 June 2012.
Posted by Rebecca at 9:19 AM

I NEED to get the OBC recording of this, I think. I was a huge Newsies fan back in the day, wrote a fanfic about Spot Conlon's little sister who came in and wowed all the characters in the grand old tradition.

Ashley's favorite newsie was always Spot, too! I was reading somewhere about actual girl newsies from the period...of course, I can't remember where I read that now...but you could be on to something there! :-) If I find the reference again, I'll post it for you.

The OBC is good but takes some getting used to singing-along-wise because some of the words are changed ("Santa Fe" was entirely rewritten, for instance), and of course it doesn't capture the high energy feeling of the songs when they're done live on stage. But most of the lyric changes are for the better, I think, and Jeremy Jordan is superb, so definitely get it and I'm sure you'll enjoy it immensely! They're doing a number on the Tonys on Sunday night, so check it out for a "preview"!