This Week in Genealogy: "Parental Wrath"

As we delve deeper into our genealogy research, we've started stumbling into some interesting stories.  Some are touching, like our great-uncle who owned a tavern that once belonged to his father.  Veterans returning home from WWII would find open arms waiting for them there, with assistance to help them get back on their feet; if they had no where to stay, he would let them board in the rooms above, paying only what they were able.  Some of our stories are disappointing, like our great-great-grandfather who seemingly abandoned his wife and eight children, disappearing to who knows where, never to be heard from again.  And some of our stories are heartbreaking, like our other great-great-grandfather who fought bravely in the cavalry during the Civil War.  He was wounded and captured, but made it home at the end of the war.  He married and had nine children, but was soon after admitted to a state hospital where he died several years later.  His wife passed away only two years after he did, leaving the children in the care of her brother, who had his own large family to support as well.

But sometimes, the stories we find are just plain funny.  This example, in the article below, was published in the New York Times in 1902.  The young lady in the story is a member of a family which married into one of our family lines.  The story itself is amusing, but the prose and especially the quotes from her father make the article all the more entertaining! 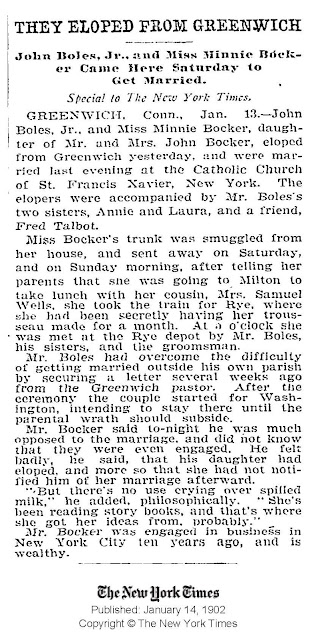 Oh, those silly story-books. :-)
Thanks for the funny article!
-Julia