This is the first jacket Ashley has ever sewn entirely by herself.  She finished it a year ago in time for the shoe workshop and wore it for the first time there; since then, she's worn it to several other events, and each time we've taken pictures and then forgotten to give it a proper write-up.  So here it is! Front of the jacket, opened to reveal the lining.

The pattern: The body of the jacket is based largely on "Jacket C" on page 26 of Janet Arnold's Patterns of Fashion 1, with slight tweaks here and there (like cutting the front piece as an entirely separate piece with the gusset as part of it, just to speed things up a bit).  The sleeves are the same as those on Ashley's Wetherburn jacket, which is copied from the pattern in Costume Close-up.

Inspirations: The color of the jacket was inspired by this original silk jacket of a similar style at the Met (acc. no. 2010.342): 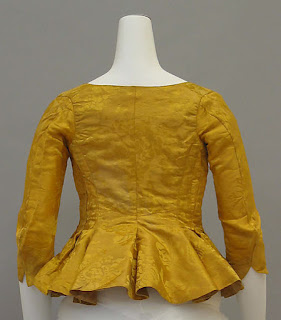 A silk jacket from the 1700s in the collection of the Metropolitan
Museum of Art (acc. no. 2010.342).
Photo linked from the Met collections online database.


Construction details: The jacket is entirely hand sewn by Ashley.  The construction process of this jacket is almost identical to the that of the Costume Close-up jacket, which is detailed in our tutorial series.  The one major difference is that instead of closing with a pinned stomacher front (as does the Wetherburn jacket) or with a laced stomacher front (as does the blue chintz jacket), this one pins closed at center front, as per the original in Arnold. Front of the jacket that pins closed.  You can see that the "gusset"
pieces have been cut as one with the front body pieces.

It also does not have the slits at the front sides; instead, the "gusset" (which we made part of the skirt of the front piece instead to save time) gives the jacket's skirt body enough to accommodate the fullness of the petticoat without the need of the slit. Back of the jacket. Detail of the back shoulder and sleeve cap.


The fabric: A goldenrod light/medium-weight linen, part of that super-lucky Denver Fabrics stash purchase that also included the linen for the lavender gown and the peachy gown.

Finishing the look: At the shoe workshop, the first time she wore it, Ashley paired the jacket with a teal linen petticoat and a block-printed cotton neck handkerchief tucked in front and left out in the back.  Underneath are a linen shift, fully-boned stays, and a linen underpetticoat. Making up a thread at the shoe workshop.
Eastfield Village, August 2011.

For the last couple of events, she has coupled it with a navy linen petticoat and the same kerchief.  She also added a bum roll to help hold out the full skirt of the jacket, which gives it the cute and jaunty little back poof so fashionable in the late 1770s and early 1780s (the "header" picture has a good view of this, too). Cleaning up after dinner.
Rock Ford Plantation, June 2012.
Posted by Rebecca at 9:29 AM

It's lovely! I love the color, and the whole outfit together is perfect. I have always wondered just how the front of the original fits...now I know!

Beautiful! Thanks for sharing all the details about it!
The colour is amazing!