We began working on this gown in December of 2010, and then it got buried beneath all sorts of other projects in the bottomless basket of "in-progress" garments.  Ashley dug it out last summer, hoping to finish it in time for the shoe workshop, and we almost got it done...all but the hem!  Then it got buried again and we more or less forgot about it until we discovered it in the basket, pleasantly surprised to find it all but complete.  Ashley finished up the hem and then wore it for the first time - a year and a half after starting it! - to Rock Ford a couple of months ago.

The pattern: Draped by me.  It is basically identical to Ashley's lavender linen gown, with the exception that the skirt is sewn on with whipstitches (instead of the backstitches I used on the lavender gown), and, of course, with the exception of the added center-front panel. The back of the round gown.
Jonathan Trumbull, Jr. House, August 2012.

Inspirations: Though not nearly as common as "open robes" (i.e. gowns with open skirts, intended to be worn with a separate petticoat), round gowns can be found without too much searching in most of the major costume collections.  The majority are dated to the last quarter of the century (about 1770 to 1790ish), and I've found them in wool, silk, and cotton, but it's pretty safe to assume they would have been made in linen as well (if someone has located an elusive linen example, please let me know!).

One of my favorite round gown inspiration sources come from the Historic Deerfield collection (HD 2002.11).  The textile more than anything else suggests a later date that what Ashley and I were looking for in ours; because of the dark ground, this one most definitely dates to the 1780s.  I wish I could find a picture of the back to see how the pleats are arranged.  One of these days, I'll get myself up to Deerfield to check it out in person because I've got almost identical fabric in my stash just waiting for a reproduction! 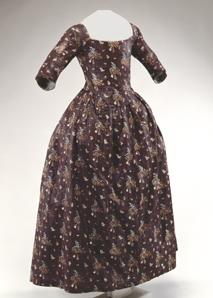 A round gown dating to the 1780s in the collection of Historic Deerfield.
Photo linked from the Five College Collections online database.

A similar - in both textile and style - gown is also at the Metropolitan Museum of Art, dated to 1774: And here's one of Ashley's all-time-favorite gowns, which just happens to be a round gown as well, made in silk damask: 
Construction details: The gown is hand-sewn, as always, using period construction techniques.  The back, bodice, and sleeves are draped and constructed in exactly the same way as any English gown. The standard English "en fourreau" pleats of the back of the gown.
Rock Ford Plantation, June 2012. Detail of the back pleats.

Where the round gown differs, of course, is in the skirt; rather than being open in the front, a drop-front panel fills in that space, so that the entire gown is a single piece.  In the picture below, you can see the "apron" front panel pleated, as any petticoat would be, to a tape, and folded down to reveal the interior of the gown. The bodice then pins closed over this, as the standard center-front-closure gown always does. The front of the gown, with the bodice pinning closed
over the attached front skirt panel.
Jonathan Trumbull, Jr. House, August 2012.

The most challenging part of making this gown was squeezing it out of 3 yards of fabric.  It's a good thing Ashley is tiny, that's all I have to say!

The fabric: A lovely lightweight linen in a tobacco brown color.  Ashley found this at Joann years ago and was saving it for a summer camp-wear gown.

Finishing the look: The first time Ashley wore the gown at Rock Ford in June, she accessorized it as a camp-following 18th-century woman would: with a printed cotton neck handkerchief and a green checked apron that would help obscure any soot or grease from the cooking fire.  She also added gold stockings, the deep dye color yet again serving to hide any dirt or dust acquired during a hard day walking and at work.  The straw hat trimmed with ruched aqua ribbons helps protect that fashionable pale 18th-century complexion.  Underneath are, as always, a white linen shift, fully-boned stays, and an underpetticoat of striped linen. For the presentation and fashion show program we recently gave at the Jonathan Trumbull, Jr. House, she dressed the gown up a bit by substituting white accessories.  The crisp white self-checked linen handkerchief and apron (which can also be seen here, worn with my peachy linen gown), along with the white stockings and the green glass beads, pull the gown into a middling class impression, which was in accordance with the setting of our program. The full flickr set for this gown can be found here.
Posted by Rebecca at 11:44 PM

I love hearing about all of your discoveries in that basket! I wonder what's in there now? I bet another surprise! ;)
Laurie

I use a quilt rack as my fabric rack, and yes it hold many discoveries and treasures. Sometimes is a great way to drape a gown before wear and after to prepare it for storage.

Anyway, I love this gown simple and elegant. Not sure if I would be able to squeeze into just 3 yards for a gown, though it would be a true challenge. Just wonderful and like how accessorizing can change the time period. I do this with my renaissance gowns often.

Looking forward for more magical garments from that mystery that is your project basket.

Oh, that bottomless basket! Actually, there was another "surprise" project in there that was started at the same time as this one, and forgotten for all the same reasons, which we finished as we finished this one. More to come on that soon!

Now the basket has exploded all over the living room floor...but I'm determined to actually start FINISHING some of things before I start anything new...for a change...! We'll see how that goes...;-)

Wow, Rebecca, that sounds exciting! I hope a certain couple of garments are those of which you speak! ;) On pins and needles...
Laurie

I haven't seen that depiction of how the round gown goes on before. It suddenly makes sense now! Thank you so much!

So very glad you found this post helpful! Both Ashley and I are addicted to round gowns now; while they weren't nearly as common as the "open" gown and petticoat combo, they're so much more comfortable to wear working at reenactments in summer heat! It's a lot easier having one less layer of skirts swinging around your legs when you're hauling water and bending over a fire. That, and it saves money on fabric, too, which I'm sure was yet another reason this style of gown appealed to its 18th century wearers! :-)