This gown was finished in January for our annual English country dance ball, and then I wore it again for our regiment's George Washington Ball a month later.  Both times, I forgot (surprise, surprise!) to give it the "Threaded Bliss" treatment.  Having only military-type events in the spring and summer, I haven't had much of a chance to wear any silk since February, so when we were invited to give a fashion show and lecture at the Jonathan Trumbull, Jr. House a couple of weeks ago, I seized the opportunity and pulled out the gown once again.  Now I'm glad I neglected to do this post earlier, because we were able to get some lovely shots with the Trumbull House's perfect period setting.

The pattern: Draped by me. Construction details: The gown is entirely hand sewn.  The construction process for this gown is identical to all our other "en fourreau" English gowns, so I won't repeat myself.  If you're interested, check out this earlier post for details. Back shot.  Pray excuse the skirt rumples; I just stood
up and didn't realize the gown needed to be smoothed so badly!
Jonathan Trumbull, Jr. House, August 2012.

The trim is a simple box-pleated design that accentuates the neckline and ends of the sleeves.  Nothing complicated, but just enough to add a splash of dimension and interest. Detail of the box-pleated trim at the back of the neckline.

The fabric: A gorgeous lightweight lavender silk taffeta from Burnley and Trowbridge.  This fabric is a dream to wear because it's so light and crisp and just makes me feel pretty! Finishing the look: The skirts of the gown and the petticoat are cut to be worn over a small hoop (the one that was first made to be worn with the sea green cotton gown); this gives the hips just enough fashionable width to make the waist appear a teensy bit smaller, and also helps the skirts poof subtly.  After seeing it in the pictures, I'm thinking that I want a slightly larger one for my next silk gown, just to add a tad bit more emphasis.  Also worn under the gown are a shift, my Diderot stays, and a striped linen underpetticoat.

To accessorize this gown to represent the "good" day wear of an upper-middling-class lady, I added a self-striped cotton voile neck handkerchief, a double-strand pearl necklace secured with a silk satin ribbon, and silver and pearl drop earrings by Janice Erickson Smith.  My cap is a striped sheer linen trimmed with ivory silk taffeta ribbons, the very fine handwork of Mistress Nicole. I also made a breastknot of silk satin ribbon (also from B&T) and paper flowers to give a little dimension to the front of the gown. 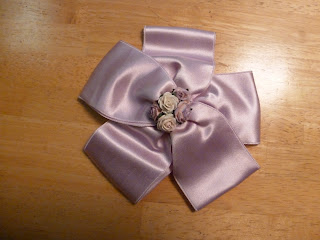 A breastknot of silk satin ribbon and paper flowers, which could be worn
either at center front or to one side of the gown's neckline.

Completing the ensemble is a coordinating striped silk gauze covered hat, trimmed in the same lavender silk satin ribbon as the breastknot.  You might recognize this hat from the previous post with the blue chintz jacket and ivory petticoat.  Even though I made the hat to go with this lavender gown, I actually haven't worn the two together yet! 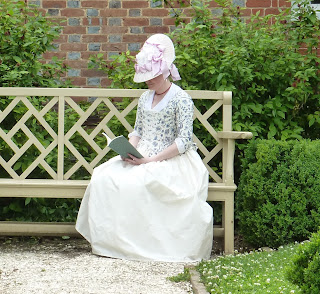 The hat in action, paired with the blue chintz jacket and ivory taffeta petticoat.
Colonial Williamsburg, May 2012. 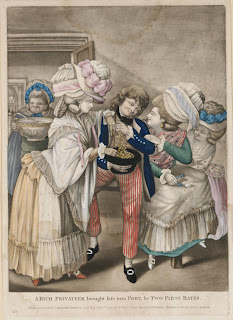 As in the print, I used a wide ribbon to create poofs around the crown and for the ties.  The gauze is tacked down to the crown to create the poofs, and then is smoothed over the brim and pulled underneath, finally secured inside, beneath the crown.  The one change I made to the inspiration hat was that the one in the print appears to be have the underside of its brim lined in the same lavender color.  I was going to do this using the silk from my gown, but I ended up having only the tiniest of scraps left.  I opted instead to simply encase the edge of the brim with ivory silk satin ribbon instead, to help secure the gauze and to give the brim a bit more of a finished look. The full flickr set of this project can be viewed here.
﻿
Posted by Rebecca at 12:18 PM

I don't think I ever knew you had finished that! I'm glad you now have a silk gown...and lavender no less! Lovely!!
Laurie

you look like the perfect 18th century lady! i love how the accessories compliment the gown!

That dress and hat are so lovely! Thank you for all the detail. The box pleat trim is very simple, but adds so much wonderful interest.

Just wonderful and so elegant! I have always wanted to go to the J. Trumbull house and boy, I would have loved to model my new silk sacque back in the fashion show!
We love those kinds of events, which seem rare when most reenactments are as you say, military events.
Mary
http://anhistoricallady.blogspot.com

This lavender gown is simply beautiful. Your choice of fabric and trim is the epitome of understated elegance. I love it!

Wonderful lavender confection, can't wait to see the pictures of the whole ensemble together. The ribbon accents flow through the gown and hat tying it all together. Wish modern clothing was this elegant, really don't even see this in evening wear. Oh the hat, just makes the whole outfit just ooze with elegance. Equisite my lady!

Awww, thank you so much for all of the compliments, ladies! I'm so pleased with the way this gown turned out, and it's such girly fun to wear! :-)