In addition to attending the large reenactment events we always blog about, our Rev War unit also presents a number of educational programs each year to schools, historical sites, groups, and museums throughout the state.  Yesterday was one of our many yearly school shows, which provides local students with a full day of interactive instruction in military and civilian life during the Revolutionary War to supplement their standard history curriculum.  My work schedule over the past few years hasn't allowed me to take part in any of these school shows, so I was thrilled when things finally fell into place to enable me to lend a hand this time around!

Our program divides students into ten different stations, each focusing on a different aspect of the Rev War period.  The topics for each station vary, depending on both the specialties and the current research interests of the individual unit members able to attend.  Yesterday's program included, among other things, foodways, the life of a Continental solider, pirates, a conversation with a British marine, spies during the Revolution, the military surgeon, CT Rev War battles, and clothing, but we've done everything from music and dance to battle tactics to drilling instruction in the past.  The students spend the day moving from station to station, taking about 20 minutes at each to learn a bit about all of the different subject areas.  Our day concludes with a "tavern scene" that stages a political conversation between patriots and loyalists on the eve of the Revolution, presenting both sides of the argument and asking students in the end to decide for themselves which side they think they might have chosen, had they lived in the shoes of their colonial ancestors.  I only wish I had had something like this to inspire me when I was in grade school!

As you can well imagine, I offered to do the clothing station and was thus faced with the challenge of how to introduce all those layers of clothes (for both men and women) to our middle school students in only 20 minutes - and make it exciting and relevant enough to capture their imaginations.  In the end, I elected to "dress" three student volunteers (in this brief block of time, that meant having them hold up the layers as we talked through them): one was a farmer who represented the majority of CT's men-at-arms during the Revolution, another was a farmer's wife, and the third was a lady who was a member of the gentry class.  I went dressed as one of the middling sort, so that all three primary levels of society would be represented to the students.

To help explain to the students both the highly stratified structure of society in colonial America and the function that clothing served to help mark those social boundaries, we began by discussing the four fibers from which textiles were made - linen, wool, cotton, and silk - and how, in many respects, there was a sort of "language" of clothing during the period that helped people distinguish, just by looking at a person, into which social level they most likely fell, and thus what type of work they most likely did in their clothes.  I asked the students if they thought we used clothing in the same way today, and why or why not?  This approach, of course, was made at the risk of being quite reductive, which was necessitated by the 20-minute session limit and the fact that our seventh-grade audience was coming to this conversation with very little context; had I been speaking to an older audience or one with any kind of previous background in the period, I would certainly have been much more cautious about qualifying such sweeping statements and discussing the complexities of both colonial social stratification and "reading" clothing in such a simplistic way.  But needs must in this case, and it seemed to work quite well in conveying such new and broad concepts. 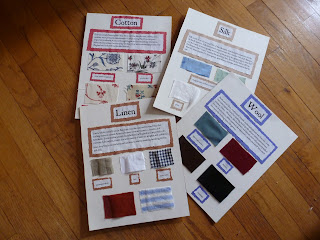 Swatch boards I created to provide the students with a tactile way to
learn about the functions and social distinctions of dress during the Revolution.

We then passed around swatch boards of each type of fiber and I asked the students to think about which social level they thought each fabric might be associated with.  Which type of fabric felt most durable, like it could withstand many washings and harsh wear out in a field or while doing strenuous household chores?  Would a textile like silk be practical for a farmer or his wife to wear, considering the type of work they had to do?  Which fabric looks and feels the most delicate and expensive, and in what type of activity might a person wearing it be engaged?

We also talked about styles and "reading" clothing with this additional dimension in mind.  After thinking about why people choose the specific styles we wear today, we discussed how styles varied across social levels during the Revolution.  Would it have been practical (and safe) for a farmer's wife to wear the large side hoops modeled by our gentry lady?  Why do you think items like jackets and shortgowns were seen mostly on members of the lower class?  Who did those of the middling sort try to emulate with their fashion choices and why?

Considering we had all of twenty minutes in which to accomplish all of this, the students impressed me no end with how quickly they latched on to the broader concepts and how readily they were able to identify and discuss similarities and differences in social identities as we went along.  Their history teacher mentioned that they will be assigned a first-person character project soon, which will ask them to use the information they collected throughout the day to assume the persona of a individual living during the Revolution.  I'd be very curious to see if any of them draw upon their brief experience with clothing to help them discover and fashion their historical personalities!
Posted by Rebecca at 10:07 PM

My 5th grader is doing a Colonial Clothing presentation at school. We have her tri fold poster finished and it looks fantastic. She loved reading your post and is so excited to give her presentation next week. She also did fabric swatches and you provided her with some fun thoughts on dressing for your economic level. Love it! Thanks, because of course, I enjoyed it as well.

Oh, that is fantastic! Thanks for summarizing what you taught. It was very fascinating. I'm glad your Rev War unit makes such an effort for the schools. It makes a huge difference. I remember back in 6th grade my history teacher was in the SCA and he started school-wide Medieval Day where the different classrooms were a different "guild". I chose the "magicians" guild and got to perform a magic trick in front of the whole school Programs like that create lasting, positive memories associated with history which we can never have too much of in children!

Rachel, I'm so very glad your daughter found a bit of inspiration for her own project here! :-) Tell her I said best of luck on her project, and I'd love to see her poster and hear how her presentation goes! I'm sure it will be splendid!

Sarah, these types of community educational programs are one of my favorite parts of belonging to this hobby. I would have been over the moon to have had the opporunity to participate in something like that when I was in grade school, so I'm thrilled to be able to take part from the other end of things now. It's such fun watching the kids enjoy learning something new! :-)

Those sample cards are great...definitely inspires me to get more organized with my fabrics! Also, it's so important to show young people how enjoyable historical clothing can be...great post!

I believe that students are so busy with studying, entertainment and finding out some new knowledge, tha they can't find enough time to eat, not talking about cooking. Thus, it seems to me that these rules are quite appropriate here: 15 Rules of Motivation.