The Connecticut Historical Society in Hartford, CT.
On 5 March, the weekend before we headed down to Williamsburg for the symposium and conference, we made the short trip to the Connecticut Historical Society in Hartford to visit their exhibit, "Connecticut Needlework: Women, Art, and Family, 1740-1840."  The exhibit had been on our "to see" list ever since it opened last year, and we had to be sure to see it before it closed the weekend we'd be in VA.  We're very glad we did because it was fantastic and included a superb variety of rare New England-made objects, many unique and all quite beautiful.  I apologize for the lack of pictures in this post, but I promise it's worth reading!  All images taken in the exhibit were strictly for private research use according to the museum's policies, so we're unfortunately unable to share them here, but many of the items are available for viewing on the CHS eMuseum.  Here are a few of our favorites:

- Two panels of a crewel-embroidered linen petticoat dating between 1750 and 1755 (acquisition number 1950.518.0).  The documentation and family history provided with the fragments asserted that this was originally two-thirds of a petticoat created specifically to be worn for a wedding.  I suspect instead that this might have functioned as a underpetticoat, which would account for the very narrow circumference if the fragment does indeed represent two-thirds of the original garment, though that's just a personal speculation; on the other hand, though, the panels are fully embroidered from waist to hem, while many underpetticoats (like this one, which was also featured in the exhibit) were embellished mostly around the bottom third, so my speculation could easily be wrong.  Anyone else have any ideas about that?  At any rate, the embroidery is beautifully done in a stunning floral and vines patterns very representative of the period, and I wish they'd make a pattern off of it because I'd love to recreate it.

- An absolutely amazing linen bedcover, decorated with crewel embroidery, dating to 1760-1770 (acquisition number 1964.35.0).  Be sure to check out the close-up photos to get a better view of the incredible detail in this piece.  The center features an eighteenth-century-clad representation of Adam and Eve.  As I refer back to my photos as I write this, I'm amazed at how fully accessorized these figures are.  That may seem like a random and irrelevant comment, but returning to this bedcover after the accessories symposium, I'm struck by the detail here.  The woman wears an apron and a blue-beaded necklace tied with a yellow-gold ribbon; this same colored ribbon also appears at the peak of her cap (which you can't see) and is used as a breastknot pinned to the front of her gown.  She also holds a fan and sports a pair of buckled red shoes.  Her dashing be-wigged gentleman carries a walking stick and a felt hat.  This just goes to support one of the primary arguments made during the symposium: one simply cannot gain an accurate concept of 18th century dress without looking at it in the context in which it was worn.

- This red satin-weave worsted (calamanco) petticoat (acquisition number 1959.54.2) is a fascinating and unique example of regional needlework.  Its design, which integrates its year of execution - 1758 - is full of whimsy and an eye towards the fantastical.  It includes a mermaid (the symbol of vanity), a lion, a leopard, fish, stags, rabbits, birds, a butterfly, and various flowers and vines.  A sketch of the complete hem design, drawn by Linda Baumgarten and John Watson (of Costume Close-up fame), is included in the catalogue for the exhibit (see below for more on that).

- Faith Trumbull's silk-embroidered overmantel (acquisition number 1925.1.3), dated to approximately 1761.  It is one of a set of three intricately embroidered pastoral pieces, the size of which alone is jaw-dropping.  The scene measures 18.25" by 51.25" (yes, you read that correctly!).  The foundation fabric is a black silk, which means that every last inch of it has been embroidered - aside from the man's breeches, hat, and shoes.  Faith Trumbull, you may recall, is the eldest daughter of CT governor Johnathan Trumbull, whose hometown of Lebanon we recently visited.

- This charmingly adorable and stunning cotton muslin dress (acquisition number 1959.11.2) features white-on-white embroidery and was worn by a teenage Charlotte Perkins in Hartford between 1805 and 1810.  The exhibit's curators speculate that the embroidery was done by Charlotte herself, rather than by a professional, because of its relatively uneven qualities.  The muslin is extremely sheer, which means the gown would have been worn over an underdress (the display features one in pink). 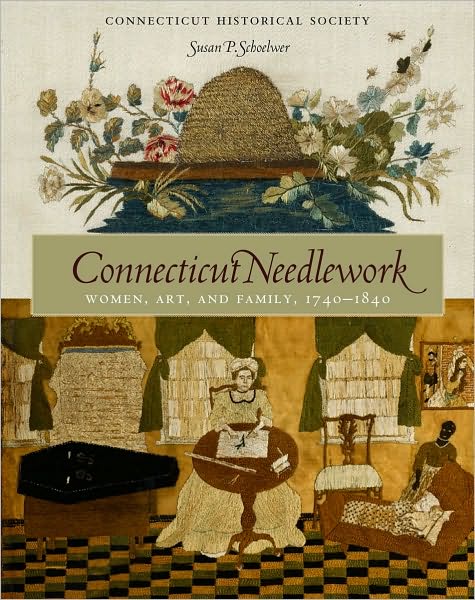 The exhibit catalogue, available directly through the
CT Historical Society.
Although the needlework exhibit is now closed, all of these item are owned by the CT Historical Society and can be viewed by making an appointment with the collection's curator.  A gorgeous full-color 220-page catalogue is also available from CHS and is well worth the price.  The photography is beautifully done and it's chock full of fantastic details about the exhibit items and the history of needlework in eighteenth- and early-nineteenth-century New England.  I highly recommend it!

I have also traced a couple of video links of the exhibit on YouTube, which offer further glimpses at some of the treasures on display: video one and video two.  Please note that neither of the videos were produced by us.  More images can be seen with this review of the exhibit from Antiques and the Arts Online.

The CT Historical Society frequently offers lectures, book talks, workshops, youth programs, and special events, so if you're in the area, be sure to check out their events calendar.  Their newest permanent exhibit, "Making Connecticut," provides an interactive historical timeline view of the life in and the culture of the area, from native and colonial settlement up through the 21st century.  We were able to browse through much of the exhibit in its preview form and were struck by the museum's innovative initiatives to engage the "modern" museum-goer in history.  Our father's family arrived in the greater NYC area in the late seventeenth century and we can trace their settlement in southwestern CT back almost that far, so seeing this exhibit, arranged in its timeline form, was particularly relevant and interesting to our personal history as well.  The exhibit formally opens on 25 May and we're looking forward to returning to see it in its finished form.
Posted by Rebecca at 12:14 PM

I lost count of how many times you mentioned one of my favorite words...embroidery! I need to get back to the Latin, writer's cramp is now gone, but I'll be back to dig further!
Laurie

Laurie, you would *love* that book! Next time a certain family member needs a present for you, drop a few hints about this one! :-)

My absolute favorite is the white on white embroidery! Did you catch the two wallets on the link with the youtube videos? That is the type of wallet I showed you at CW, with the Irish stitch, which was one of the patterns I learned for pinballs.
Laurie