Yesterday, we (finally!) went to see the new Jane Eyre film, which stars Mia Wasikowska (Jane), Michael Fassbender (Rochester), Jamie Bell (St John Rivers), and Judi Dench (Mrs Fairfax).  We went with a family friend, our second grade teacher who we've kept in close touch with all these many years.  The summer before I entered high school, she handed me her two favorite books, said I was finally old enough to read them, and told me she looked forward to the endless discussions she knew we'd have as soon as I finished them.  The novels were Pride and Prejudice and Jane Eyre, and I hold that one summer's experience responsible for my lifelong love affair with eighteenth- and nineteenth-century literature (aka my career!) and history, and my fascination with the history of fashion.  So of course I couldn't go to see a new adaptation of the novel without her!

Rochester and Jane.  Photo from the official Focus Features website.
I should preface my review with the disclaimer that I am prodigiously difficult to please when it comes to adaptations of novels.  I should also say that when it comes to Jane Eyre in particular, my perspective is necessarily an academically skewed one tainted by years of close study, so I hope the review that follows won't unduly offend anyone; it certainly isn't intended to do so, and I completely understand how someone coming to the film without such excess "baggage" would view it with a much milder eye.  But I'll begin with the positive - the good stuff - the costumes!

Visually the film is very, very strong.  The cinematography is stunning and the location shots and color palates are gorgeous works of art.  The costumes, designed by Oscar-winning Michael O'Connor (of The Duchess fame), are fantastic and one of the greatest assets of the film.  Apparently, both O'Connor and the director, Cary Joji Fukunaga, elected to set their adaptation in the 1840s because they both dislike the excesses of 1830s fashion.  The only costume in the film styled to date from the latter period appears on Aunt Reed at the beginning of the movie.  With the director as invested in the details of dress as the costumer designer, it's no wonder the costumes here achieve such a high standard of superior excellence and accuracy which makes all the difference to the film as a whole. 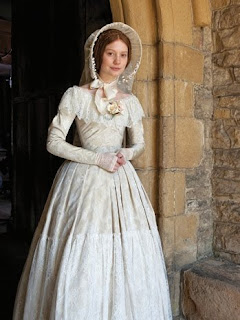 Jane's beautifully understated wedding gown.
I wish I could find a close-up of the sheer bonnet because
I'd love to try to make something like it.
Photo from Vanity Fair.
From leather to hair accessories to shoes, O'Connor describes how the details of the period correct drove his design decisions.  He used antique textiles from the period wherever possible, though due to their rarity, he explains, they were most often able to be integrated only in small amounts as trims and laces.  All of his fabric choices and designs are based on meticulous research, and his mantra throughout this film rings sweetly in the ears of historical sewers.  "The lining, the buttons, the stitching, everything was totally researched. I always say, ‘Is there a reference for that, is that something they did?’ And if people say [they] don’t know, then I say we can’t do it—there’s so much information from that time that there’s no excuse not to have it."  For the full Vanity Fair interview from which this quote and much of this information is drawn, click here.   For a closer, very sigh-worthy look at some of the costumes and accessories, accompanied by comments from O'Connor and Fukunaga, see this movie "Style Gallery" from THR.

The straw bonnet at right was made with antique hat braid gifted to the filmmakers.
I wish I could find a picture of the back because it's an amazing piece.  I want it!
Photo from the official Focus Features website.
Some of the film's costumes were recently on display to promote the film, and can be seen on the Hollywood Movie Costumes and Props blog.  Be sure to check out the wedding gown, Jane's plain grey dress, and the cloak and plaid gown Jane wears when she flees Thornfield.

The stunning ensemble worn in the final scenes of the film.
The dress fabric is a reproduction cotton and the hat made from antique hat braid.
Photo from the official Focus Features website.
All that said, I was quite disappointed with this movie when it came down to the interpretation of the story by both the screenwriter and the actors, especially after all of the hype surrounding the film.  One reviewer praises "the freewheeling adaptation [which] drops needless scenes and spurs the story ahead with galloping momentum,"  but I read these characteristics very differently.  I appreciated the intriguing re-organization of the timeline of the story; the Moor House scenes are privileged at the beginning of the movie, which was a productive move on the whole because film adaptations in general conveniently forget or downplay that rather difficult-to-reconcile (yet so crucial) portion of the book.  On the other hand, though, there were just too many other scenes vital to the complex and multi-layered overall meanings of the novel that were completely left out: Bertha Mason was relegated to less-than-a-subplot (a strange move, considering the fantastically gothic feel of the film overall), there was little dialogue at all provided for the fleeting Gateshead opening (though these famous opening chapters establish the basis for who Jane becomes and what ultimately motivates her throughout her life), and Blanche Ingram, that essential figure of contrast, self-doubt, and ultimate self-definition for Jane, remained one-dimensional and almost unintegrated into the plotline.  I was also a little surprised by the abrupt ending and the lack of any real show of remorse by Rochester during the "confession" scene (which has some of the finest dialogue in all of English literature).  The re-writing of so much of the original dialogue in general across the whole of the film seemed a little unnecessary.  Also, the incredibly understated nature of Mia Wasikowska's Jane was a little too quiet and subdued for the Jane that Bronte seems to imagine.  But in the end, I'm left wondering how many of these faults are the result of some unfortunate editing, necessitated by the all-too-brief two-hour feature film requirements. 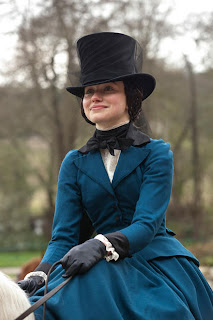 Blanche Ingram's fabulous riding habit.
The hat is trimmed with an antique veil.
Photo from the Enchanted Serenity of Period Films blog.
As I'm certain many of you know, there are numerous film and television adaptations of Jane Eyre.  My personal favorite is the 1983 BBC miniseries starring Zelah Clarke and Timothy Dalton; not only does it preserve almost all of the original plot and its structure, but also much of the dialogue is drawn verbatim from the pages of the novel.  For those used to big-budget, bright-and-shiny Hollywood adaptations (or even BBC productions of the last 15 years), the starkness of the sets and the simplicity of the cinematography will be a shock, but you quickly get used to it and I almost prefer that style because it privileges the story, rather than the medium used to represent it.  The 2006 Masterpiece Theatre version is also good and worth watching (Toby Stevens makes a very fine Rochester!).  The other adaptations I don't much fancy and wouldn't recommend, either for reasons of mis-cast lead roles or because they ignore or re-write massive chunks of the original novel.

Marla Schaffel and James Barbour in the 2000
Broadway production of Jane Eyre: The Musical.
Photo from Playbill.com.
But by far and away the finest adaptation of Jane Eyre ever made is - believe it or not - the musical version, written by Paul Gordon and John Caird, which played on Broadway from 2000-2001.  If you aren't familiar with it, this review from Playbill.com gives a fantastic overview (except when it comes to that last paragraph, which is wildly inaccurate, in my opinion).  Luckily, I've located some amateur video of the production on YouTube (follow the links to the "Jane Eyre: The Musical" in parts at the side), and although the quality isn't the best, it gives a fine idea of how the musical achieved what (to date) no film or television adaptation has: representing the passion and the soul that motivate the story in the first place.  It's just a shame that something necessarily as ephemeral as a theatrical production is the dramatization that has come closest to "getting it right."
Posted by Rebecca at 12:19 PM

This post is definitely proof that your career is a perfect combination for you...the literaturea snd costuming! Soooo, do you think I should watch this version?
Laurie

The mini-series with Zelah Clarke and Timothy Dalton was my introduction to Jane Eyre, when I was 13. It made me read the book and it was one of the most important books of my teens. I identified hugely with Jane. I have never really liked any movie versions, just because they cut out so much of the plot. However, I was quite pleased when I saw the mini-series again as an adult and still foundit very good. :) I will watch this movie for teh costumes and try not to get the editing bother me.

Laurie, I think my recommendation would agree precisely with Isis' - appreciate the film as an entity in and of itself, and try to forget it's a JE adaptation. It really is quite a beautiful movie.

Isis, did you notice the DVD of the Clarke-Dalton has extra scenes that weren't on the old VHS release? I was ecstatic when I noticed that! :-) The literature character I always identified with most was/is Fanny Price. Not as glamorous as Jane, but very me. :-)

Rebecca: I only have the VHS so, no. :) But I don't have a VHS recorder anymore and now I have a VERY good reason to buy the DVD!