For those of you feeling the royal frenzy as the hours tick down to tomorrow morning, here are a couple wedding necessities, in case you've missed them:

- The official Royal Wedding website provides some great details, videos, and updates, including the official program for the ceremony and the procession to follow. 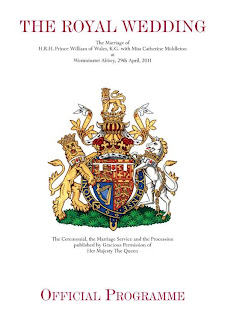 The cover of the official wedding program,
linked from the official Royal Wedding website.
- In this age of multi-media, you've got a choice as to how and where to catch your glimpse of the ceremony.  For those "traditionalists" (like us!) who prefer the television screen to the computer screen, the wedding will be broadcast live States-side by a number of television networks.  Both PBS and BBC America will host a simulcast of BBC One programming, beginning at 3am Eastern.  ABC begins their live coverage of the event at 4am Eastern.  And for those of you who prefer the "modern" method of watching the big day, the BBC will stream their coverage live online.  Youtube's Royal Channel will also be streaming live, as will ABC.

- As a lovely complement to our previous post on British royal wedding gowns of the past, the BBC recently posted a slideshow on their website, which offers another glimpse of some of these stunning pieces of history worn by the fashion icons of days gone by.  Another fun page, also posted by the BBC, is this fascinating overview of eight royal weddings, full of fun little tidbits of trivia including everything from what they ate to the various controversies surrounding each day, to some of the memorable gifts each royal couple received.

Not me...but I expect I will watch a re-run, of which there will be several no doubt.
Must confess I'm dying to see 'the dress'

I will. Can you believe I can't talk the kids into getting up at 4am? I watched Princess Di's wedding and I was a huge fan of her. So now I want to see her son get married. Then seeing the dress is #2.
Laurie

Laurie, they say now that they won't get up, but when they hear you awake, they just might be tempted to crawl out of bed, too! Tell them it's a live history lesson! :-)

When we left for our walk, dd said "Wellllll, I might watch it if it wasn't so early." My whole family thinks I'm nuts to get up. I told them I got up early to watch Princess Di's wedding and her funeral. I'm not about to miss her son's wedding!
But you're right...we'll see who I entice in the morning!
Laurie

It's all over now, but was well worth getting up early for. Don't watch much TV, and was glad to find commercial free coverage thanks to your mention of "BBC America". It was all quite lovely, from the clothes to the ceremony. Best Wishes to them both.

We were up at 4, and watched every fantastic minute! It was all perfection. I loved the music choices at the ceremony---so evocative.
My husband watched until he left for work at 6:15, and then last night we watched the entire day replay, snuggled up together.