"Napoleon and the Empire of Fashion" 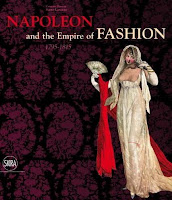 Beginning with it's official opening in Milan last year, there has been some considerable blogger buzz regarding the exhibition "Napoleon and the Empire of Fashion."  The English-language version of the exhibit catalogue has just been released, and I received my copy over the weekend.  As the official website indicates, there is currently a poll in progress to help determine where the exhibit might travel next, and in an effort to encourage you all to vote to bring it here to the US, I strongly entreat you, gentle readers, to pay a visit to the poll page and vote your hearts out!  What I wouldn't give to see these extraordinary gowns in person!

Photo linked from the official exhibit website, napoleon-fashion.com
For those of you unfamiliar with the project, "Napoleon and the Empire of Fashion" brings together hundreds of original garments, shoes, and accessories to represent a total of fifty-one fashionable ensembles from 1795-1815.  What is most fascinating and revolutionary about this particular collection is that its owners and curators, Cristina Barreto and Martin Lancaster, have assembled it around a set of key French fashion plates of the period, most of which appeared in Les Journal des Dames et des Modes (the first successful fashion magazine, according to the exhibit catalogue).  Over the years, Barreto and Lancaster made their purchases based not only on the conditions of items, but more importantly on how well they would coordinate to a gown or ensemble in color, style, provenance, and date.  After hearing Linda Baumgarten describe the difficulties of mounting delicate textiles and fragile accessories in a way that mimics drape and use on the human body (during her tour during the recent conference), I find it even more spectacular that these fifty-one figures have been fully outfitted and accessorized in (almost) all antique items, so that they appear as if they've stepped right out of the fashion pages next to them.

In both the exhibit and the catalogue, the inspiration prints are juxtaposed with their material realizations as gowns, shawls, bonnets, fans, veils, bags, and shoes almost literally come to life.  Part of the project also involved the meticulous cleaning and restoration of each item; as the curators explain in the catalogue, they wanted every piece to look as it appeared when it was first made and worn.  Back to be being "light, bright, and sparkling" (as Jane Austen would put it!), the fifty-one ensembles represent for the curators the revolution and evolution of fashion during the Napoleonic era, reflecting Napoleon's strategic manipulation of the textile and fashion industries to imagine and project a very specific and unique "Frenchness" for the people of France and the world.  As the catalogue introduction describes, mannequins approximating the body shape of an early 19th century woman in period undergarments were specially designed, though each has an identical head so that the fashionable ensemble each wears speaks for itself, creating a character and a specific social situation all its own. 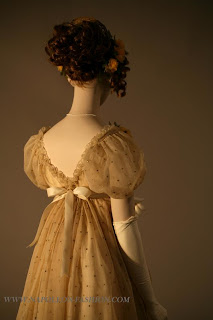 Photo linked from the official exhibit website, napoleon-fashion.com
Natalie Garbett, who helped coordinate and literally "dressed" the exhibition, keeps a blog, and several of her posts detail her experiences with staging the exhibition.  Her entries offer a fascinating and unique glimpse behind the scenes, showing not only the type and degree of work that goes into putting something like this together, but also the very personal and touching stories that emerge when one works so closely with garments and accessories from the past.  Her own reproduction sewing work is gorgeous, too, so be sure to check it out!

Besides the photographs on the exhibit site, additional official images of a number of the pieces (including some breathtaking detail shots) taken by Thomason Photography can be found here.  Video footage of the Milan exhibit, with commentary by the curators, can be viewed on YouTube by clicking here and here.
Posted by Rebecca at 3:46 PM

I want to get this book, since I want to recreate one of these gowns when we study the Napoleonic Era again!
Laurie

Laurie, between the fashion plates and the extant garments (and the gorgeous detail photography of them), the book is chock full of inspiration. You really can't beat the price for what you get in it - it's definitely worth the investment!

Oh, forgot to say that I voted weeks ago that it come to Washington DC!!!!!
Laurie