"Married in white, you have chosen all right," Pt. 2

Surprisingly little has been written or discussed about the details of the wedding ensemble of the new Duchess of Cambridge.  Our friend Laurie of Teacups Among the Fabric and Teacups in the Garden just did a fantastic post about the gown and its incredible connection to traditional British needlework and the royal and historic fashions of the past, but other than her post and the obligatory gushing-in-the-most-general-terms being done by various fashion gurus, interest in a genuine analysis of the gown's details seems to be minimal.  In view of this discovery, and to formally inaugurate Catherine into the line of royal brides and bridal wear we profiled earlier, here is on overview of the newest history-making gown and its ravishing accessories. The official wedding portrait.
Photo linked from the official British Monarchy flickr page.
Designed by Sarah Burton for Alexander McQueen, the gown was made of ivory and white satin gazar (a tightly-woven semi-sheer organza-like fabric).  The bodice, skirt, and train were embellished with an intricate design formed of English and French Chantilly lace, meticulously hand-cut and hand-appliqued onto ivory silk tulle using traditional Irish Carrickmacross lace-making techniques.  The Royal School of Needlework, which preserves the needle arts of the past through its teaching initiatives and textile restoration projects, performed the delicate work, skillfully interweaving roses, thistles, shamrocks, and daffodils into a stunning white-on-white design that gives the gown's skirts a depth and richness subtly evocative of the elaborate embroidery that has often decorated royal ceremonial and formal dress of the past.  The choice of flowers was, of course, highly symbolic.  The union of Great Britain and Northern Ireland is represented by each nation's national flower: the English rose, the Scottish thistle, the Irish shamrock, and the Welsh daffodil.  It was a beautiful design gesture, one strong historic union literally embodied in a new union of bride and groom, themselves future leaders of the United Kingdom.  I've desperately tried to trace some close-up shots of the detail work on the gown, but have thus far been unsuccessful.  If anyone has located any, please do let me know! 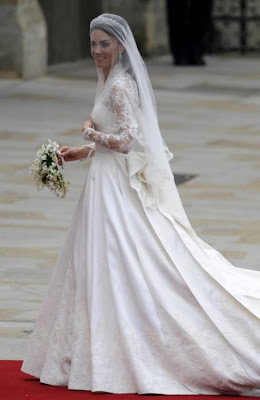 The best shot I can find where the applique detail is slightly visible.
Be sure to click on the link to bring you to the larger version!
Photo linked from HuffingtonPost.com.
This press release by the Royal School of Needlework describes the process undertaken by the team to create the royal wedding gown.  It's fascinating; hands were washed every thirty minutes, needles changed every three hours, and no thread longer than thirty cm were used to help preserve the integrity of the delicate fabric and the appliqued laces.  There is no mention of the size of the team or the length of time it took to complete the work, but it must have been a truly extraordinary project in which to take part.  If you'd like to learn more about the RSN (and trust me, you do!), be certain to check out this video.  Many thanks to Laurie for sharing it! The silhouette of the impeccably tailored gown.
The incredible detail of the embroidery is also visible here.
Photo linked from the official British Monarchy flickr page.
The nearly nine-foot train was in perfect proportion to the setting, the occasion, the gown, and its understated elegant style.  Like the gown's skirts, the train too was hand-embroidered with the same floral design.  It was joined to the back of the skirts with oh-so-cleverly draped folds that echo the bustle of a Victorian gown.  The gown's lightly padded hips also helped create a Victorian-inspired silhouette, emphasizing Catherine's narrow waist and helping to provide body and form to the beautifully arranged pleats of the gown's skirts. 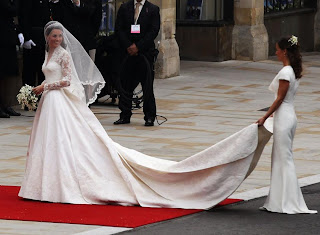 Photo from HuffingtonPost.com.
Like many royal brides that have gone before her, Catherine carried sprigs of myrtle in her bouquet.  The myrtle was taken from a plant grown from a sprig that the present Queen (then Princess Elizabeth) held in her own bouquet at her wedding in 1947.  Queen Victoria's eldest daughter was the first royal bride to include myrtle in her bouquet; the plant for her represented not only marriage and bridal innocence, but more personally the relationship between her parents, Victoria and Albert.  Catherine's bouquet further emphasized the traditional language of flowers in its inclusion of lilies of the valley (return of happiness), hyacinth (the constancy of love), Sweet William (well, that's obvious...but it also represents gallantry), and ivy (affection and fidelity).

All of these details - and more! - can be found in this post from the official Royal Wedding website.  The post also provides information about the gown worn by Catherine's sister Phillipa, the bridesmaids' dresses, and the pages' uniforms, so be sure to take a look! A stunning close-up of the lace-covered bodice
of the gown, and the Cartier Scroll/"halo" tiara.
Photo linked from the official British Monarchy flickr page.
The veil of ivory silk tulle, edged with hand-embroidered flowers was secure by a tiara lent to Catherine by The Queen.  Known as the "scroll" or "halo" tiara, it was made by Cartier and given as a gift to Queen Elizabeth the Queen Mother (then the Duchess of York) by her husband King George VI (then Duke of York) in 1936, just three weeks before Edward VIII renounced the throne in favor of his younger brother.  The Queen Mother gave the tiara to her eldest daughter, the present Queen, to mark Princess Elizabeth's eighteenth birthday.  The Queen has occasionally lent it to members of her family, including Princess Anne and Princess Margaret, for special occasions.

The scroll or halo tiara, made by Cartier in 1936.
Photo linked from Aestheticus Rex.
If you missed any of the festivities (or would like to see them again!), highlights can be seen on the official Royal Wedding website and the full BBC broadcast can be viewed on the official Royal Channel on YouTube.  The BBC will also be releasing a DVD of the day's events later this month.  Additional photos of the day can been found on the official British Monarchy flickr page. 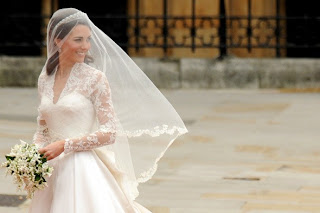 And one more, just because it's my favorite shot from the day.  That veil
was draped perfectly and I love the way the wind has caught it here
so that you can see the hand-embroidered detail along the edges..
Photo linked from RoyalWedding.aol.com.
Posted by Rebecca at 11:53 AM

I liked reading about the significance of the embroidered flowers. I hadn't been able to find those anywhere. How sweet of you to reference me! Since the wedding, I've taken a new interest in the name of my royal county!
Laurie