Fun with Census Records: The Case of Laura Ingalls Wilder

In keeping with our recent theme of genealogy, and to complement last week's release of the 1940 US census records by the National Archives and Records Administration, we thought it might amuse our readers to share some of the "fun" non-familial things you can also do with census records.  One of our favorite census-related pastimes is to try to locate some of the people of the past that we admire.  Here's a look at what we uncovered about one of them: our favorite childhood author, Laura Ingalls Wilder (7 February 1867 - 10 February 1957).  Laura is fairly easy to track through census records both because her name is relatively uncommon and because we already know a good deal about the relatives who might be listed with her at various points in her life, which makes narrowing the choices down to the Laura much quicker. 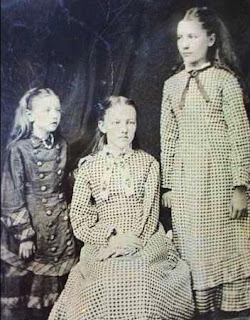 The three oldest Ingalls girls: l-r are Carrie, Mary, and Laura in the 1870s.
Photo linked from NewWorldEncyclopedia.org.
The first census Laura appears in is from 1870, when we find her living in the "little house on the prairie" near Montgomery City, Kansas.  Here she appears with her parents, C.P. and Caroline, and her sisters Mary and Caroline.  From this record, we see that her father was born in New York, and that she, Mary, and their mother were all born in Wisconsin.  Younger sister Caroline, who was only two months old when the census was taken, was born in Kansas.  The last name has been spelled "Ingles," but with the soundex option for searching indexed names on familysearch.org, it's still easy to find.

Click here to view the full census page on familysearch.org.
By 1880, the Ingalls family has moved to De Smet in Kingsbury Country, Dakota Territory.  Youngest daughter Grace has been added to the family.  But what is so interesting about this particular record is that, in listing the occupations of each member of the household, it indicates that both Mary and Laura "help in keeping house."  While this would be only expected for teenage girls like them, the ordinary suddenly become more extraordinary when one realizes that Mary by this time was blind.  As the National Archives indicates, "Enumerators in that census [i.e. 1880] were instructed not to make such a note unless a daughter contributed substantially to the welfare of the household," so clearly Mary was an active and productive young woman, despite her quite recent illness and blindness.  It comes as no surprise, then, when Mary pops up listed as a student on the Iowa State Census for 1885 at the Iowa College for the Blind in Vinton, Iowa, which she attended from 1881-1889.

The 1890 census records were almost entirely destroyed by a fire in Washington D.C., so the next time we can trace Laura is in 1900, by which time she is living in Mansfield, Missouri, married to Almanzo Wilder, with a daughter Rose, who the census tells us was born in December 1886.  What is particularly satisfying about the 1900 census is that they asked for several very useful bits of information for the first time, including the number of years a couple had been married (Laura and Almanzo, we can see, have been married for 14 years already), and the total number of children a woman has had, with the number now living.  Laura reports two children, with only one currently living; those who have read her books will recall Laura's own emotional description of the birth and death of her second child in The First Four Years.

To view the full census record with additional information, click here.
Image linked from familysearch.org.
1910, 1920, 1930, and now 1940 (see page 5) (at ages 74 and 83 respectively!) find Laura and Almanzo still living in Mansfield (they would live the remainder of their lives there).  In 1930, Rose Wilder Lane rejoins her parents on their farm.  For this decade's census, new questions regarding occupation were added, and what is so great about this particular record is that it lists both Laura and her daughter as "authoresses" working in the industry of "novels."  How neat is that?  :-)

If you're interested in learning more about the full genealogy of Laura Ingalls Wilder, check out this page.  The National Archives also has a great resource page for teachers that uses the example of LIW to integrate census records into lessons on American history, literature, and politics. 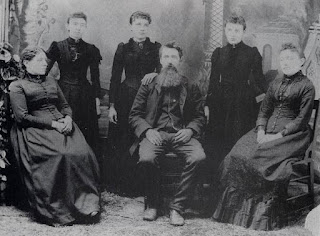 The Ingalls family in 1894.
Photo linked from the Herbert Hoover Presidential Library.
And just in case you're wondering what became of the rest of the Ingalls family after Laura's marriage, here they are in 1900, still living in De Smet, with 24-year-old Caroline a printer (she worked for the town newspaper) and 22-year-old Grace a teacher.  Charles died soon after in 1902; in 1910, mother Caroline is listed as widowed, but still living with daughters Mary and Caroline.  Grace married Nathan Dow in 1901; she appears in 1920 and in 1930 with him.  Carrie married in 1912; here she is in 1920 with her husband, David Swanzey, and his two children from a previous marriage.  I haven't been able to locate either mother Caroline Ingalls or Mary Ingalls (who never married) in 1920, so I'm not sure where they were living from that point until their deaths; Caroline died in 1923 and Mary in 1928.

**Just a note on the links I've provided with each census.  Where available indexed online with free access, I've provided a link to the image for each record.  When the online image is available only via a subscription service (we've been using Ancestry.com), I provided a link to the indexed record on familysearch.org, though it does not include free access to the document image itself.  Whether available to be viewed online or not, the documents are all in the public domain, and print copies of the records are freely accessible at numerous sites around the country, if you're interested in taking a look at any of them yourself.**
Posted by Rebecca at 9:56 AM

Oh I was able to follow all of that since I was a huge Laura Ingalls Wilder fan! I have a ton of books on her!
Laurie

We visited several Laura Ingals Wilder sites on our trip across the country this past summer, so this is kind of fun to read. Of course, the major impact of having visited these places is that now I want to visit more of them.
Laura's daughter Rose, by the way, died in Danbury, CT in 1968.

Oh, how I'd love to visit some of the LIW sites! I remember when I was young, there was a book about "Laura Ingalls Wilder country" at our local library that had pictures of all the houses and towns where she lived, and I used to borrow it all the time. I tried to persuade my parents for years to take us to visit some of them, but alas, they were never convinced. One day I'll get there...:-) Which site was your favorite?

It looks like Almanzo wasn't being truthful about his age in 1900! I know Laura obscured their age difference in her books. I wonder if the census entry was an honest mistake or if it was intentional.

Caroline and Mary ingalls are right above Grace and Nathan Dow on the 1920 census.