Fun with Census Records: The Case of L.M. Montgomery

In a previous post, we used U.S. census records to trace the life of Laura Ingalls Wilder and her immediate family.  Now, we'll turn to our north and to another one of our favorite childhood authors and take a look at Lucy Maud Montgomery (1874-1942) using the same type of resource, this time in Canada.

Lucy Maud Montgomery at age ten in 1882.
Photo linked from wikipedia.
Lucy Maud Montgomery was born on the 30th of November 1874 in New London (then called Clifton), Prince Edward Island.  The first Canadian census in which we can track her is thus 1881, where we find her at six years old living in nearby Cavendish.  The trouble with this particular census is that it does not indicate the relationships of the individuals within a household, so without knowing a bit of additional information about LMM's life, things could get confusing at this point.  Here we see her, listed as "Lucy M. Montgomery," living in a household with McNeills: Alexander, Lucy Ann, Chester B, and Mary E.  LMM's mother died before young Lucy Maud was two, and her father shortly after relinquished his infant daughter to her maternal grandparents, the Macneills.  Maud was thus raised by her grandparents, who we see here with two of their children, Maud's uncle and aunt.

To view the complete record, click here, and then click on "view image."
Here is Hugh John Montgomery, Maud's father, still on Prince Edward Island in that same year, 1881.  The widower returned briefly to his parents' home before departing for Saskatchewan.  In 1890, after he had established himself and a new home out west, Maud's father sent for her to come and live with him and his new wife and family.  Although she stayed with him for only a year, the 1891 census caught her with her father's family in Prince Albert, Saskatchewan, just before she left to return home to the Macneills on Prince Edward Island.

This census, unlike the previous one, indicates the relationships of each member of the household, and also the place of birth of each individual and each individual's father and mother.  Here we see Hugh Montgomery at age 49; he was born on P.E.I., as were both of his parents.  His new wife, 28-year-old Mary, was born in Ontario.  Then comes 16-year-old Maud, who, as we know was born on P.E.I., as was her father.  But what's interesting is that it indicates her mother was born Ontario.  Clearly either the census taker assumed that Maud was Mary's daughter as well, or he was not told anything to the contrary for some particular reason or another.  Beneath Maud are her two new half-siblings, Katie and Bruce, as well as a Scottish servant.

To view the complete record, click here, and then click on "view image."
After the short stay with her father, Maud was glad to return to her roots on Prince Edward Island and she remained there until her marriage.  The 1901 census shows her living alone with her grandmother; her grandfather had died in 1898.  Things get more exciting, however, when you look at the household three below theirs.  Brother and sister David and Margaret Mcneill, here living with their adopted nieces, were the owners of "Green Gables" house, just down a path and across the road from Maud and her grandmother.  They were cousins of Maud's grandfather, and Maud spent a good deal of time visiting the pair when she was growing up.  They would later become one of the inspirations for Matthew and Marilla Cuthbert.

To view the complete record, click here.
An easier-on-the-eyes transcription can be found here.
On 5 July 1911, L.M. Montgomery married the Rev. Ewan Macdonald and the couple moved to Ontario.  I have a feeling Maud got caught in between with this year's census.  Here is her husband listed alone without his new bride in Ontario, which implies this was taken prior to July.  I have been unable to trace the unmarried Maud on Prince Edward Island, however, so I'm assuming she was married and had left the Island prior to the P.E.I. enumeration later in the year. 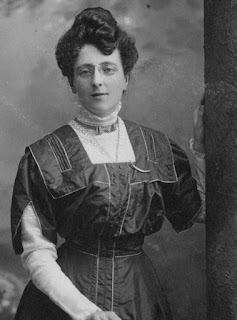 L.M. Montgomery in 1907, just prior to the publication of Anne of Green Gables.
Photo linked from extraordinarycanadians.
Canada has not yet released the census records for any enumeration after 1911, so this is as far as we can go with Maud's life for the present.  While these few censuses (censi?!) don't come close to representing the full, varied, and very exciting scope of Maud's early life (they don't show her at college or boarding away from Cavendish as a teacher, nor do they show her living with her Campbell cousins, as she did for some months following the death of her grandmother while she prepared for her wedding), they do offer an intriguing glimpse of the places and people that structured her life.  We look forward to the release of additional records to see what else we can learn about the life of this influential and extraordinary writer.

In the mid-1990s, we visited Prince Edward Island several times to see the historic sites and places that were such an integral part of the life and works of LMM.  We've been feeling awfully nostalgic about those trips and recently dug out the photo albums to reminisce and wish ourselves back there again.  In an upcoming post, we'll share some of those photos (however old they may be now!) to give you a brief tour of one of our all-time favorite places to visit.  Hopefully one day (soon!) we'll get back there.  :-)
Posted by Rebecca at 5:34 PM