Just as we did last year, I'd like to offer a special post today in honor of Mr. Jefferson's birthday!  As in the past, Monticello is holding a free ceremony today which is part of the annual Founder's Day at UVa.  Poplar Forest will be serving cake to all who visit Jefferson's retreat today.  William & Mary is hosting an innovative event tonight for its community which is also meant to mark the 250th anniversary of Mr. Jefferson completing his studies at W&M.  You can read about the interactive AVAdventure here. 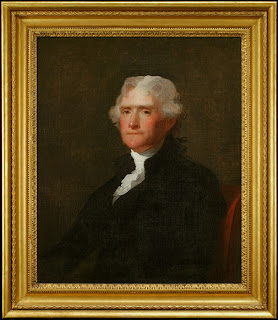 Portrait of Thomas Jefferson (1743-1826)
1805
Artist: Gilbert Stuart (1755-1828)
Origin: America, District of Columbia
Unframed: 29 5/16" x 24 1/2" (74.5 cm. x 62.2 cm.) and
Framed: 36 9/16" x 31 11/16" x 2 3/4" deep
Oil on canvas
Acquisition funded by John D. Rockefeller, Jr.
Acc. No. 1945-22
Last year I shared some fun facts and today I'd just like to share some recent Jefferson-related news and activities that might be of interest.
New exhibits at Monticello and the Smithsonian focus on the lives and work of the enslaved workers at Monticello.  Mulberry Row has been brought back to life through new "mini-exhibitions" on site, as well as a new tour (which runs April through October), helping visitors to understand more fully the way of life at Monticello during Jefferson's life.  The companion website, Landscape of Slavery: Mulberry Row at Monticello, provides a deeper look through profiles of several slaves, descriptions of the varied trades practiced, and maps of the evolution of this section of Jefferson's land.
Now at the Smithsonian's National Museum of American History in Washington D.C. is another exhibit which discusses the practice of slavery in the 18th century and particularly focuses on slavery at Jefferson's home.  It explores the daily lives of his enslaved people, with emphasis on individuals and their families during their time at Monticello.  Another excellent companion website provides articles and features that give us a glimpse into just a few of the lives that were effected by slavery.  This exhibit runs until October 14, 2012. The passageway under Monticello leads to the kitchens, storage,
and other dependencies.
April, 2010
Also currently on display the Smithsonian National Museum of American History is "Jefferson's Bible."  Jefferson's compilation of different transcriptions of the Bible was meant as a personal exercise in order to better understand the life of Jesus, or as he titled it, "The Life and Morals of Jesus of Nazareth."  You can view the book digitally as well as explore the conservation process on this website.  The book will be on display until July 15, 2012.
Recently published by the Massachusetts Historical Society and the Thomas Jefferson Foundation, Thomas Jefferson's Granddaughter in Queen Victoria's England is the 1838-39 travel diary of Ellen Wayles Coolidge during a visit to England with her husband.  Her observations on London society, museums, and the British monarchy not only provide us with insight of Victorian England, but her recollections of her youth and home life provide us with a glimpse into her family.  The book is available for purchase through Monticello and amazon.com.
Colonial Williamsburg has reinstated the Jefferson Blog.  Each week a Jefferson quote is posted on the blog and visitors are encouraged to respond discussing the relevance of his words to our world today.  To celebrate the 250th anniversary of his W&M graduation, the quotes are focused around education.
Posted by Ashley at 1:09 PM