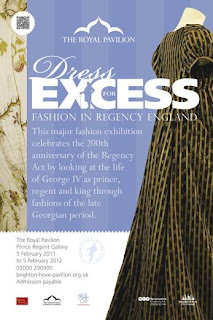 The exhibition's flyer, linked from the
Royal Pavilion and Brighton Museums flickr page.
"Oh to be in England"...now that fashion's there!  To mark the 200th anniversary of the passing of the Regency Act in 1811, the Royal Pavilion in Brighton currently has on display a significant fashion exhibition entitled "Dress for Excess: Fashion in Regency England."  This is only the second time the costume collection of the Royal Pavilion has been showcased to such an extent, so if you're within visiting proximity (or can afford to get yourself within visiting proximity), this sounds like an opportunity that should not be missed! 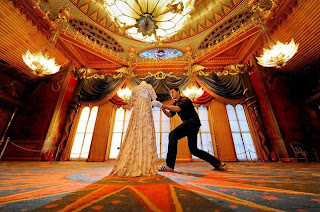 Photo linked from the Brighton and Hove City Council flickr page.
The exhibit, which runs until 5 February 2012, takes as its inspiration the excesses - fashionable and otherwise - of King George IV.  His coronation was the most expensive in British history and his coronation robe, a silk velvet affair trimmed with ermine that required eight bearers to carry it, cost a total of £238,238 (Queen Victoria's was a bargain at £69,421!).  Along with the robe, other pieces of the king's wardrobe, including a pair of his late-life breeches and a printed silk banyan, will be on display, along with other pieces of men's and women's dress from the period.  All are displayed in the gloriously opulent setting of the restored Royal Pavilion, complemented by its rich period furnishings and textiles.  For more on the details of what is included in the exhibit, see this press release.  Let's keep our fingers crossed they decide to release a printed catalogue! 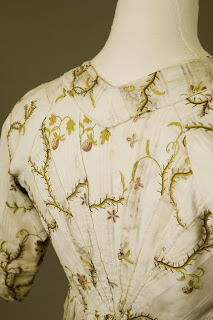 Detail photo linked from the
Royal Pavilion and Brighton Museums flickr set.
Jennifer Rothrock, a student at the London College of Fashion, is currently serving an internship with the curator of dress at Brighton.  She has been keeping a blog of her curatorial and reproduction projects relating to the "Dress for Excess" exhibit; it offers an incredible behind-the-scenes glimpse of all of the meticulous work that goes into staging a costume exhibit of such royal and historically significant treasures.

If you'd like to read more about the exhibit, be sure to check out this fantastic review at AustenOnly, which includes lots of tantalizing images.  Additional images from the exhibit can be seen at the Royal Pavilion and Brighton Museum's flickr set.  If anyone goes (or has already gone), we'd love to hear about it!
Posted by Rebecca at 6:52 PM

Thanks! I put the blog on my reading list!
Laurie