The myths of origin and inspiration surrounding our favorite works of literature are oftentimes just as fascinating and magnetic as the works themselves.  Here's an account of how one of our personal all-time-favorite books came into being. 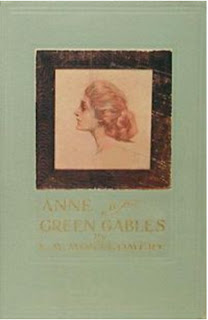 First edition cover of Anne of Green Gables (1908).
Linked from Wikipedia.
On 16 August 1907, Lucy Maud Montgomery recorded in her journal that her first novel, Anne of Green Gables, had just been accepted for publication by the L.C. Page Company of Boston.  She reminisced about the agony she had felt at trying to begin the book: "I have always hated beginning a story.  When I get the first paragraph written I feel as though it were half done" (Selected Journals, Vol. 1, p. 330).  Then she hit upon her inspiration:


"I have always kept a notebook in which I jotted down, as they occurred to me, ideas for plots, incidents, characters, and descriptions.  Two years ago in the spring of 1905 I was looking over this notebook in search of some suitable idea for a short serial I wanted to write for a certain Sunday School paper and I found a faded entry, written many years before: - “Elderly couple apply to orphan asylum for a boy.  By mistake a girl is sent them.”  I thought this would do.  I began to block out the chapters, devise incidents and “brood up” my heroine."

The "faded entry" did not record a fleeting spark of imagination specifically conjured as a future plot, but rather an actual incident in the life of Maud and her family, as the writer detailed in a later journal entry on 27 January 1911: “The idea of getting a child from an orphan asylum was suggested to me years ago as a possible germ for a story by the fact that Pierce Macneill got a little girl from one, and I jotted it down in my notebook” (Selected Journals, Vol. II, p. 40).  "The "elderly couple" she noted was in fact Pierce Macneill (the cousin of LMM's grandfather) and his wife, Rachel, who lived directly across from the Green Gables property in Cavendish, PEI.  The childless couple had applied to adopt an orphan boy in 1892 to help out with the farm chores; their neighbors John and Annie Clark did the same.  But instead of two boys, the two sets of unsuspecting adoptive parents found a five-year-old boy and his three-year-old sister awaiting them at the train station.  When the Macneills contacted the orphanage about the mistake, they were told that because there were so few boys, and because they were hesitant to separate the siblings, they had sent the little girl with her brother instead.  Like Matthew and Marilla, Pierce and Rachel decided to keep and officially adopt the little girl, who they named Ellen and who took their surname.  Despite attempts by multiple researchers over the past twenty years to trace her birth name and family, no details about Ellen's origins have been found.  Even her place of birth has been questioned, with John Willoughby suggesting that Ellen and her brother were "Home Children" brought from England and Irene Gammel more recently arguing that the siblings more likely had been born in Nova Scotia. 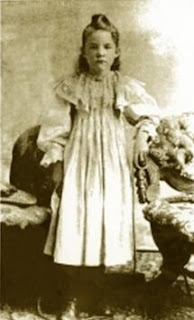 Ellen Macneill, ca. 1895.
Photo courtesy of Ruth Gallant and linked from Ryerson University.
Maud claimed that while the events surrounding Ellen's arrival had provided the impetus for the story of Anne of Green Gables, the character of Anne herself was nothing like the Macneill orphan.  "There is no resemblance of any kind between Anne and Ellen Macneill who is one of the most hopelessly commonplace and uninteresting girls imaginable" (Selected Journals, Vol. II, p. 40).  Either way, it's easy to see how the happy ending of the Macneill orphan mix-up would have started the wheels of Maud's vivid imagination turning.  As Mrs. Spenser said to Marilla, "I call it positively providential."


For more information on Ellen Macneill and the composition of Anne of Green Gables, take a look at:

- John Willoughby's Ellen is the only extended account of Ellen's life
- LMM-Anne.net's Anne of Green Gables "Creation and Publication" page
- The Selected Journals of Lucy Maud Montgomery, edited by Mary Rubio and Elizabeth Waterson.  There are five total volumes; volume two covers the year of Anne's publication.
- Irene Gammel's new book, Looking for Anne: How Lucy Maud Montgomery Dreamed up a Literary Classic.  A preview of the American release of the book (which has an alternate title) can be found here on googlebooks.
- The most comprehensive LMM biography, Lucy Maud Montgomery: The Gift of Wings, by Mary Rubio
- LMM's autobiography, The Alpine Path, which includes her account of her writing career
Posted by Rebecca at 1:58 PM

Thanks for this interesting post on my favorite children's author and the topic of my master's thesis.

Another great resource is the Oxford UP "Annotated Anne of Green Gables." Much like wearing period clothing for living history, the book makes a great companion when visiting PEI. :)

Too bad we didn't have all these links a few years ago when my daughter did a Canadian history research project. She had to choose a province so she chose Prince Edward Island. Of course that led to researching LM Montgomery and we did stumble upon this news clipping! Thanks for sharing *more*!
Laurie

Hi "Sew"! My apologies for the delayed response (hectic summer so far!). If I may ask, on what aspect of LMM is your thesis focusing? I wish I had had the foresight to pursue LMM academically (I took the British route...for better or worse!), especially now, as there's some fantastic new scholarship coming out. Were you at Anne conference a couple of years ago?

I have the Norton Anne, but didn't realize Oxford had an edition as well! Must seek that one out now, thanks for mentioning it! :-)

Ellen absolutely came from Nova Scotia. She was the grandmother of my cousin's husband. Married a Stewart on PEI.

I realize this is very late, will probably never be seen but wonder how you know; did she remember?